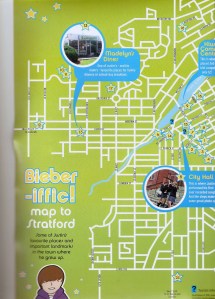 I’ve never had a Map to the Star(s) before!

I am the most wonderful wife in the world. My husband doesn’t believe me, but it’s true. Knowing what a Shakespeare nut he is, I surprised him with a trip to Stratford, Ontario  –  the home of the Stratford Shakespeare Festival and, as it turns out, the home of Justin Bieber.At first, I didn’t realize what I’d done. I bought tickets to a play and reserved us a spot on a backstage tour. That left us with a little time to kill, so we wandered around the picturesque town square. In the windows of every few shops we saw Justin Bieber t-shirts emblazoned with “To Bieber or Not To Bieber.”

Oh yeah, I thought. Justin Bieber is from Canada. Clever. 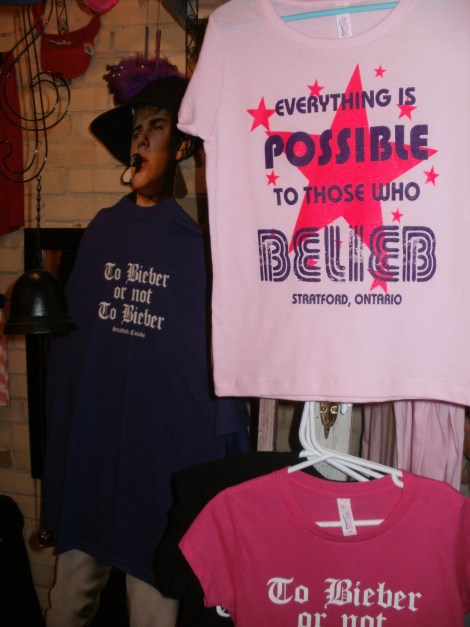 Then we walked into the Visitor’s Center and saw a cardboard cut-out of Justin Bieber and a guitar sealed off in a glass case. That’s when it finally hit me: we were in Justin Bieber’s hometown! He wasn’t from just Canada; he was from Stratford, Ontario!

(Get ready for more exclamation points.)

I sucked in my breath. It doesn’t matter that I’m older than Bieber’s mother, or that my daughter isn’t much of a fan. I am. And I was in Justin Bieber’s home town!!!!!

I grabbed my Bieber map and handed my husband the camera. “We’ve got to go to all these places.”

He thought I was kidding. Because my husband– who thinks he knows me — had no idea that I was a Bieber fan. The crazed look on my face told him it was true. I really meant it. I wanted to follow my new ‘map to the star’ and visit all of Justin’s favorite hangouts.

He said it, but I knew he didn’t mean it. After all, I’d bought him tickets to the Shakespeare Festival, so surely we could do something I wanted to do, too.

I fear here I must backtrack a little. My husband is a few years younger than me, and knows that most of the guys on my “List” are younger than me, too. But Justin Bieber was taking it a little too far.

“I don’t lust after him. I’m not attracted to him. I’m just a fan,” I explained. And then I had to explain more.

I’m a Justin Bieber fan because he has such a great story. I’m a sucker for any story of a person pursuing his or her dreams, working hard to get where they want to be, and earning success. (Watch Never Say Never.) What Justin Bieber did with social media was unprecedented, and his success has been unparalleled. I can’t help admire that, and I like most of his music.

Besides, it’s fun to get caught up in Biebermania. So we traipsed around town, taking my picture in various places, and looking for Bieber just in case he was in Stratford that weekend. (He wasn’t.) 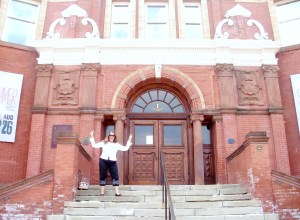 Here I am in front of City Hall where Justin performed his first ever recorded song.

During breakfast at our B&B the next morning, we casually brought up Justin Bieber without revealing me to  be the freak that I am.

“Oh yeah,” our host Tim told us. “I saw Justin at Scooper’s about two weeks ago with his friends.” 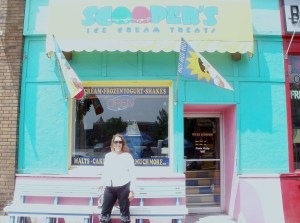 Here I am in front of Scooper’s where Justin liked to get ice cream after his soccer games.

Tim pretended not to notice my dilated pupils and gasp. “He and his mom used to eat at Madelyn’s Diner a lot. Madelyn is a friend of mine, and she said that sometimes she gets phone calls with a young girl on the other end asking if Justin is there. He sometimes tweets when he’s going. It throws business her way.”

I’d noticed Madelyn’s on my map. So it was real! I’d been wondering whether it was really just a Chamber of Commerce map of businesses willing to pay to be on it, but so far, I had confirmation of Justin frequenting at least two of the spots. I wanted to run and grab my map and start charting my path for the day, but we were actually leaving after breakfast to go home. I rolled up the map and “saved it for my daughter” instead.

“I want to come back and see more shows next time,” my husband said as we left the quaint Shakespearean town behind. “We’ll get tickets to several shows like everyone else did.”

As soon as I find out when Justin’s going to be making a trip home.

I won’t ask if you’re a Bieber fan here, though you can feel free to admit it. Or is there another star whose hometown map you’d have to follow?

Presidential limos at The Henry Ford.