I was in Las Vegas a week after a gunman shot randomly into a crowd, disrupting and killing 59 lives and a world that tried to make sense of this tragedy.

I watched some of the coverage on the news, but it was upsetting and was no lnoger news. So I quit watching. My trip to Las Vegas was already booked and I wasn’t going to let this crime stop me.

I’d seen a news segment on the man who builds these white crosses for every victim of every tragedy. He does it because he lost his own loved one to a tragedy and didn’t want them forgotten. He created these crosses to honor and memorialize victims of heinous crimes.

I saw the segment of him starting work on all 59 white crosses needed for the lives of those killed at the Harvest 91 concert the week before. I knew he was working around the clock, and I knew the memorial was complete.

What I didn’t know was where the memorial had been erected. So we walked, and walked, and walked down the Strip where everything is MUCH farther than it appears. As we passed the Mandalay Bay Hotel we saw the windows that were boarded up. It was surreal to think that just a week before, tragedy had struck. But more surprising was that the music festival was actually across the street; not in the open area between the Mandalay Bay and Luxor as I’d imagined it. No. The gunman had shot across six lanes of traffic with a grassy median in between, over the stages on the other side of the street, and into the crowd. I couldn’t even imagine it. Absolutely unreal.

It was sobering to pass by and see the police still guarding the concert grounds which were still considered a crime scene at that point. There weren’t many people down at that end of the Strip. I knew everyone we passed was there for the same reason. To pay our respects to those innocent victims. 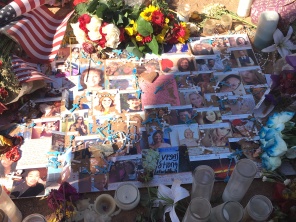 The crosses were at the very end of the Strip underneath the iconic ‘Welcome to Las Vegas’ sign. The crosses were barely visible; flowers, cards, stuffed animals, candles, flags, letters, and pictures were piled along the row of white crosses. We all filed past slowly, looking at the pictures and names of those killed. Most were young women. I hadn’t known anything about the victims until then.

Everyone I met who lived in Las Vegas thanked me for being there; for not letting this monster keep us away. They rely on the world to visit Las Vegas. We’ll never forget what happened, but we can’t let terrorism defeat us. That’s the message Las Vegas send the world. #VegasStrong 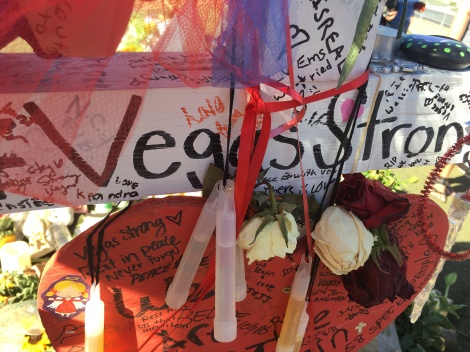 One response to “Vegas Strong”