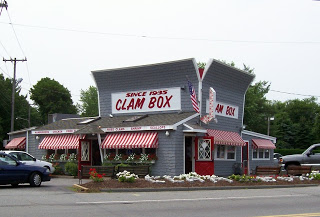 For me, clams are high school summers on the Jersey Shore. They’re the juicy, succulent sensation of newfound freedom; driving with newly minted licenses and spending the days at the beach. ﻿My friends and I always stopped for a basket of clams at Moby’s in Atlantic Highlands for lunch at the beach. The clams were huge, mouth-watering salty treats that tasted like seashore and sunshine. Moby’s was casual outdoor dining on a deck at the foot of the Highlands drawbridge. We went there covered in sand and suntan oil to sip sodas and share some clams while we watched all the cute boys work. They all spent their summers handling seafood at Moby’s. It was the cool place to work.

Zoom ahead 20 years, driving through New England with my family. We stopped at a restaurant in the middle of Massachusetts and I ordered clams off the menu. They were juicy and briny and immediately transported me back to my youth on the Jersey Shore. Right then and there I made it my mission to sample as many clams on our trip to Maine as I could. I was sure I’d never taste any as good as Moby’s.

The clams at Stewman’s Lobster Pound in Bar Harbor came close. I think the outdoor deck atmosphere and view of the water helped. Whole, big clams fried in light batter are meant to be eaten outside by the sea. Those were the best clams I tasted in Maine. Of course, I had lobster a few times (while in Maine do as the Mainers do), but clams are my seafood of choice.

Then I read that the Clam Box in Ipswich, MA was reported to have the best clams in New England. On our way down to Boston we stopped by to see whether that report was true. I liked the ambience, though we weren’t on the water. The portions were very generous and the clams were good, but it wasn’t Moby’s. That taste and experience still eluded me. After eating as many clams as I could up and down the Northeastern seaboard, I decided there’s really only one way to recapture the taste and nostalgia of my youth. I’ll have to go back to New Jersey.

If you know of any good clam joints, let us know. I’m always looking to recapture my youth.

13 responses to “Weekly Photo Challenge: Lunchtime at the Clam Box”