I’ve tried Chicago hot dogs and Gray’s Papaya in New York, but I have never liked hot dogs until I went to Eli’s.

My mom took me there after a friend took her. It’s the kind of local hangout that builds its clientele by word-of-mouth and word of Eli’s has spread faster than gossip. It’s always packed, inside and out, despite the fact that there’s not even a sign to mark it, other than the stenciled pig hanging on Riverside Drive in Cincinnati. 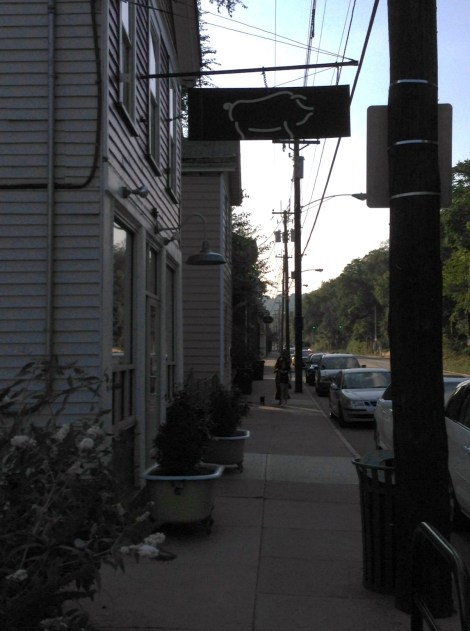 Or you could look for the crowds gathered around the picnic tables out back, or sprawled in the grass enjoying their hot dogs and BBQ picnic-style.

As we sat there, group after group arrived, pulling coolers behind them. They greeted other people and made a party of it, while the kids played in the grass and we waited for the live band to start. I was relieved to know that there is indoor seating because I’ll need to visit Eli’s in the wintertime, too! The interior is comfortable bohemian atmosphere. There’s a record player and a stack of records. Patrons can choose music to play, which is also piped outside until the band starts. No matter which record people chose, it created the perfect mood.

So, what makes Eli’s hot dogs so good? Two things. First, Eli’s is actually better known as a BBQ joint. They smoke their meat outside for 20 hours. You can even watch. They slap the pulled pork with a vinegar mop on the grill and dust the ribs with a dry rub. I had the pulled pork sandwich and it was delicious. But my mom insisted we try the hot dogs, so she ordered two for the table.

The hot dogs are Nathan’s all-beef and here’s part of what makes them so delectable — they’re deep fried! Just for a minute, but it makes all the difference. Still, that’s only half the reason Eli’s hot dogs are so good. The second reason goes back to my earlier point: Eli’s is a BBQ joint, and they top their hot dogs with Eli’s BBQ sauce, a heaping mound of cole slaw and PORK CRISPINS FROM THE SMOKER! Oh my god, my mouth is watering just thinking about it.

Add to that some jalapeno cornbread, macaroni and cheese, and jalapeno cheese grits, and you have all the fixin’s for the best BBQ picnic along the Ohio River or anywhere else!

Eli’s only takes cash or check. I tell you now, because if you’re in Cincinnati, you’ll probably want to stop by. Bring some family, bring some friends, and bring a cooler full of drinks. Then look for the pig and park yourself. And be sure to order some hot dogs.