There are moments that pass unnoticed. Things that happen around me that I am oblivious to. It happened this weekend in Dublin when I stayed at the Burlington Hotel (now Doubletree Hilton). I sat in the lobby nursing a coffee for 3 hours waiting for my room to be ready, watching hordes of people in red jersey shirts wander in and out of the lobby. I didn’t give them a thought.

Stupid, stupid, stupid! I should have realized something big was going on, but I didn’t realize that until later.

There’s nothing I hate more than an opportunity missed. I saw those dozen young men in uniforms, carrying around sticks with paddles on the end of them. They looked like school boys to me; college-aged. Other people were wearing jerseys, too. It made me think of college sports in the U.S. It didn’t seem like any big deal. But it was.

A few hours later I went to a pub for dinner. It quickly filled up with people donned in yellow & blue, or red jerseys that matched the teams on the big screen. The game began and the older couple next to me began cheering and blessing the players. I watched the young men running around the field, hitting a ball with the ends of their sticks. The blue & yellow team hit one into the goal and the woman beside me cheered.

She nodded. The implication that I was a self-involved idiot was implied. She went on to explain that when the ball goes into the goal, it is three points as opposed to one point when the ball goes over the goal between what looks like American football goalposts to me. I watched a while more, but couldn’t really follow the game. I still didn’t realize that what was happening was kind of a big deal.

The next day I boarded a bus for Limerick and County Clare and got quite a lesson in what I’d missed and what the game of hurling means to the Irish.

He went on to explain what was so special about hurling, Ireland’s own Gaelic national sport. These are hometown boys. There is no professional league. The players are amateur; no one is being paid to play and many have jobs. (Some do have sponsorships and also play for club teams.) Plus, the players can only play for the county in which they were born. No wonder the team allegiance and fan-dom had seemed so strong. This game was personal. The game I’d watched was the All-Ireland Final Replay and County Clare had beat County Cork.

We were headed into County Clare and the homecoming celebration was evident everywhere. Houses were decorated with saffron & blue pennants and flags. People were still sporting jerseys in the days after. Tony said they’d have bonfires to welcome the team home Sunday night, and that 30,000 people would come out to celebrate. 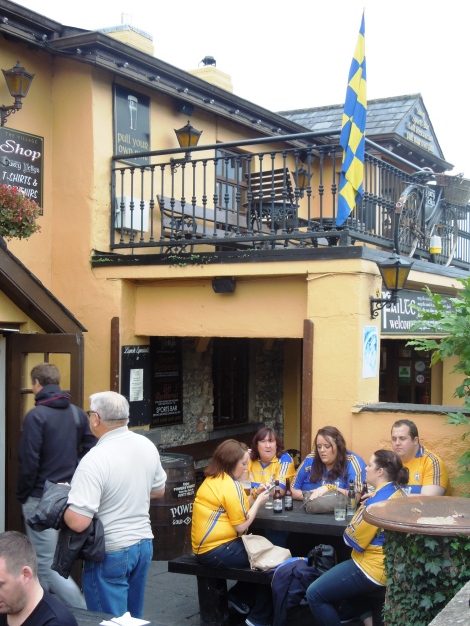 He also joked that 90% of Ireland’s work force came to a standstill during the game. Servers stood alongside their customers watching the big plays of the game. Cabbies dodged into pubs to catch some of the action. And it all happened while I sat in the pub having dinner. I just didn’t notice.

I still don’t know much about the game of hurling. It seems like an exciting, fast-paced game. I do know this: it’s a big deal in Ireland, and it’s something I won’t miss next time.  But first I’ll trace my ancestry, so I’ll know which team to root for.

Are you familiar with hurling?

20 responses to “People Were Hurling and I Didn’t Notice”