Santa Claus, Indiana, that is.

The town named for the iconic Christmas figure definitely knows how to celebrate the holiday season. The three December weekends before Christmas are filled with activities for families — especially those with small children who thrill at the sight of Santa Claus.

The hotel lobby is decorated for Christmas year-round, but the lodge takes it up a notch with Christmas packages and activities in December. They offer one- or two-night stays that include dinner and breakfast buffets, craft activities, pictures with Santa in his sleigh, and storytime with Santa and Mrs. Claus, followed by milk and cookies. The little ones loved it and were captivated by Santa long after they’d jumped off his lap. If you have little ones, definitely bring them here. 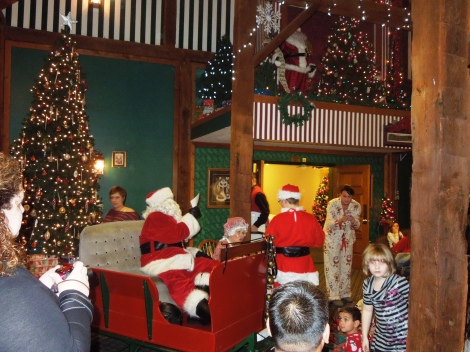 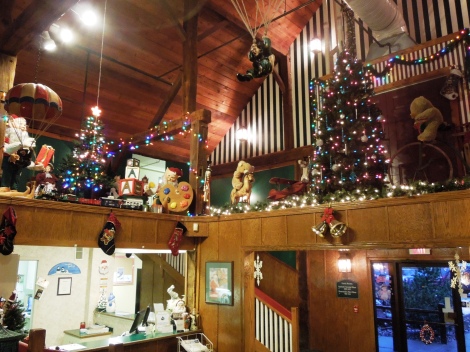 The front desk and some of the lobby decor.

Though camping or renting an RV may not be your first choice of lodging in December, staying here would be pretty cool. Lake Rudolph puts on their ‘Land of Lights’ Christmas lights display that tells the story of Rudolph. It’s fun to drive through, but the awe of all those lights only lasts as long as your drive. Imagine staying there and getting to enjoy them for hours each night! (It ends at 9pm, so you should be able to sleep afterward.)

Part candy store, bookstore, gift shop, and the home of the Avalanche frozen hot chocolate, this is a fun stop. At Christmastime, the North Pole Network is set up. For $7, children can sit at a computer terminal and type in their wish list to Santa, via an elf helper who asks some questions about sharing, being nice, and helping with chores to ensure that each child is going to be on “Santa’s Good List.” They leave with a certificate that guarantees they made it.

On Saturday nights, Candy Castle roasts chestnuts on an open fire, just like the song goes. I’d never tried a chestnut, roasted or otherwise, so enjoyed this experience. The chestnuts are roasted in an iron skillet for about 5 minutes until they pop, then they are easily peeled and eaten. We went around in a circle and all the people there tried to describe the taste: ‘carroty’, ‘starchy’, ‘nasty’, ‘like ham and potatoes’, ‘like a raw potato’. 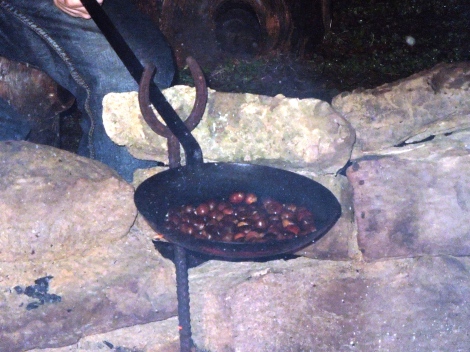 I liked it, but it was very starchy. It made me want to head inside for the frozen hot chocolate which is DELICIOUS! I’m not sure what makes it so extraordinary, but it tasted like creamy melted chocolate. We only got regular-sized cups, but maybe we should have gotten the gigantic 1/2 gallon version called the Avalanche – the world’s largest cocoa beverage.

The small musuem is a great place to learn about the history of Santa Claus, and how the town has lived up to its name. Much of the story revolves around the post office and postmasters, who dedicated themselves to embodying the spirit of Christmas and Santa Claus. According to local legend, it was a cold December night when the townspeople gathered together in a small church to choose a new town name. A gust of wind blew open the church doors and the sound of sleigh bells could be heard. A child exclaimed that it must be Santa Claus and the townspeople decided the town would be called Santa Claus, Indiana. This name was officially accepted by the United States Post Office Department in 1856.

Lots of kitsch from the Santa Claus Land theme park and letters to Santa are on display. A 22-foot statue of Santa is erected on a hill outside, dedicated to ‘the children of the world.’ 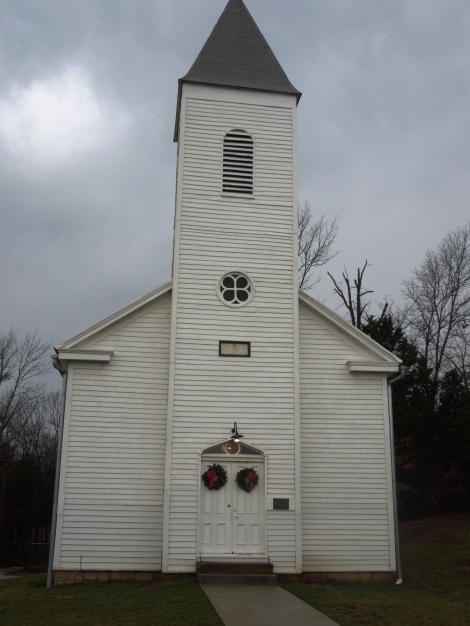 I think our favorite experience in Santa Claus was actually storytime at the 1880 wooden church. Master storyteller Susan got the entire audience involved in an interactive interpretation of the story of Saint Nicholas, the story behind ‘Twas the Night Before Christmas,’ and the story itself. We even learned sign language as we were called up to be reindeer, windows, turkeys, Clement Moore, etc. Then Santa Claus himself entered the mix. It was fun and interactive and I doubt there was a single person there who didn’t love it.

We spent a magical weekend in Santa Claus, Indiana partaking in all the Christmastime activities. The only thing that could have made it more perfect would have been snow. Maybe we’ll get that for Christmas.

What special Christmas activities do you like to do?

*Special thanks to the Spencer County Visitors Bureau for putting together this special weekend for me. All opinions are my own, but are undoubtedly shared by many.