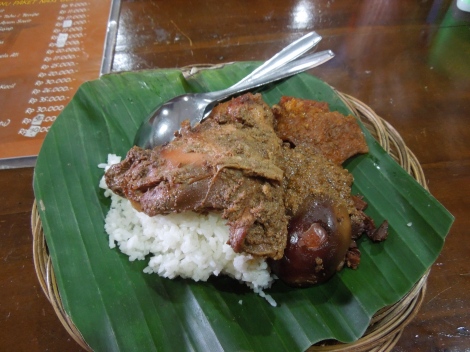 The round, brown object toward the bottom of the picture is the egg.

I only ate one meal outside of Alamanda on my brief trip to Yogyakarta. While out sightseeing, our driver suggested Gudeg for lunch, a traditional dish of Java. He drove down a few streets then parked on a road that offered one Gudeg restaurant after another. Every sign seemed to promise the best, but he took us to the one that “really is the best.” Gudeg Yu Djum.

We sat inside among several tables of locals and were given a menu. Our driver, Tono, quickly explained what the options were. It was quite simple: all the dishes were Gudeg. What varied was what part of the chicken you ordered as part of your dish. It started with tofu at the top as the cheapest meal, then gradually got more expensive depending on your chicken part. Prices ranged from 9,000 Rupiah (IDR) to a whopping 55,000.

“Do you think this is expensive?” Tono asked us. 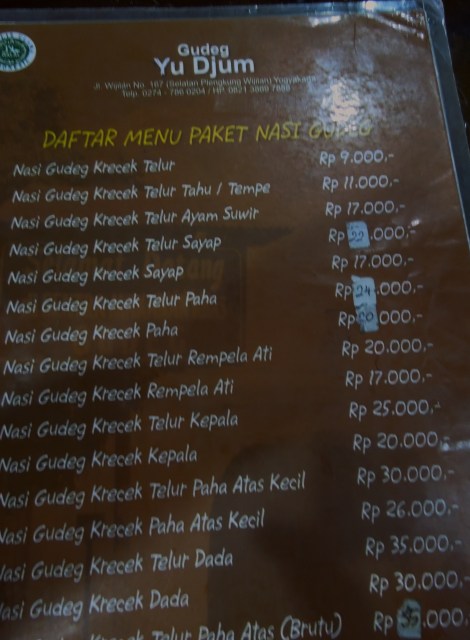 “It is expensive for us. Most people cannot come to the restaurants,” Tono explained. Which gave me pause.

But most people in Yogyakarta do eat Gudeg. Whether they pay 75 cents or make it more cheaply at home, it is a filling dish. The star of Gudeg is jackfruit boiled for several hours with palm sugar and coconut milk until it is sweet. It is served with hot krecek (crispy cow skin), telur pindang (a hard-boiled egg), tahu and tempe bacem (soya cake), and chicken stewed with garlic, shallot, candlenut, coriander seed, galangal, bay leaves, and teak leaves served over white rice.

The egg is boiled with the jackfruit and spices, which gives the hard-boiled egg a brown color. It was very hard cooked and was my least favorite part of the dish. But the jackfruit and the chicken were delicious! The crispy cow skins were spicy and had an unusual flavor. I probably could have skipped those and eaten more jackfruit.

The dish as a whole was simple, yet filling. My verdict on Gudeg? Good, except for the egg. I’d definitely eat it again.

Do you typically try the local speciality dish?