When I was 6 years old, I slipped on the ice while I was walking to the bus stop and knocked out a tooth. I’ve been a nervous wreck about ice ever since. Which may make you wonder why in the world I would try curling.

These stones weigh 42-lbs. each, but felt light as air gliding on the ice.

My husband was fascinated with curling during the last Olympics. He made a statement (which he no longer recalls) that he thought it would be fun to try. So I looked into it and discovered Cincinnati Curling Club. 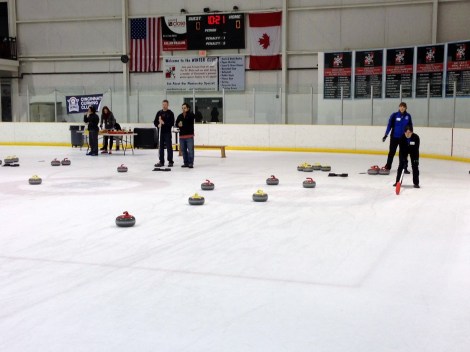 I signed us up for a Saturday night session with the Social Club and then fretted and worried about how many times I would fall. I am not exaggerating when I say that I will not step outside my front door when there’s ice. Voluntarily going out onto the ice with 42-pound curling stones and brooms seemed like a cruel test of my love for my husband. I did it anyway. And guess what? I had a blast!

I was incredibly relieved to learn that the ice isn’t slippery like normal rink ice. After the Zamboni goes around the rink, crew with special hoses go out over the ice and sprinkle droplets that create texture on the ice. Plus, we all fitted ‘grippers’ over the soles of our shoes; black rubber oversoles that really gripped the ice. (I want some for at home!)

I was assured that it would be nearly impossible to fall. I did fall, but I was the only one who did in a whole rink full of people, and it only happened when I was running down the ice trying to sweep ahead of the quickly sliding stone. Me. Running on ice! A fall was inevitable.

The sport was much more taxing than I would have expected. That may have been due in part to my position as the second thrower. That meant that while my other three teammates threw their two stones per end (the term for each round), I was sweeping. So I was essentially running up and down the rink furiously sweeping the ice for nearly two hours. Rumor has it that curling burns between 300-500 calories per hour. I believe it. I was sweating. 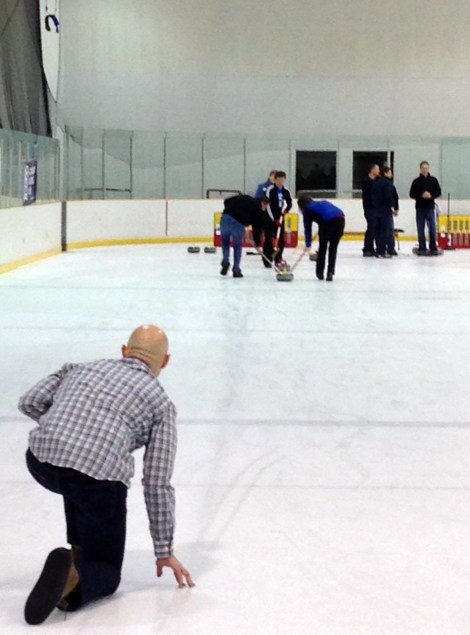 This guy rarely let his knee drop. You can also see the black ‘gripper” on the sole of his shoe.

Our instructor said that I had nice form when I was throwing stones. Maybe at first. It’s not as easy as you’d think. It requires pushing off something like a runner’s mark with one foot on a Teflon-coated slip and the other leg extended behind you in a sort of curtsy while you lightly (haha) glide your stone forward. I started out strong, but soon found myself letting my knee drop to the ice. I learned the hard way — don’t give in to that temptation or your knee will be bruised.

So the next day I was a little sore, a little bruised, and oddly — a little calloused. I think I’m the only player there who got callouses from sweeping a broom. But I didn’t care. I had a blast! It was much more fun that I would have ever expected. Makes me think it’s not too late to set my sights on Olympic dreams…

What Olympic sport would you compete in?

21 responses to “I Could Be An Olympian!”