While I was doing my research before our trip to Italy, I discovered that it was possible to get tickets to an audience with the Pope in Vatican City and that one of those opportunities would occur while we were in Rome. You could chance it and just show up to the event hoping to get a ticket, or you could fill out a form, fax it to Vatican City, and get your tickets by mail. Since tickets are free and this was our only chance to see the Pope, we filled out the form and faxed it in.

I cannot tell you how excited we were to receive an envelope in the mail from the office of the Pope. (It’s been scrapbooked. 🙂 )

Once in Vatican City, you must go to the bronze door at St. Peter’s Square the evening before and get your actual tickets from the Swiss Guards. So much pomp and circumstance! We loved it.

The next morning we dressed respectfully, awed and reverent before we ever even got there. We went early, hoping for good seats. So did everyone else. To say the experience was less-than-reverent is an understatement.

It was pushing and shoving, people rolling strollers over other peoples’ feet. It was selfie sticks and jean shorts and rude behavior by people from all over the world. It was a mad, road-rage shuffle toward the security gates and then a free-for-all once you were through. At no point did anyone ask to see our very coveted tickets. At no point were we directed where to go. We just moved as far forward as we could, unsure as to whether any areas were off limits or not. Apparently not. We ended up 9 rows from the front! 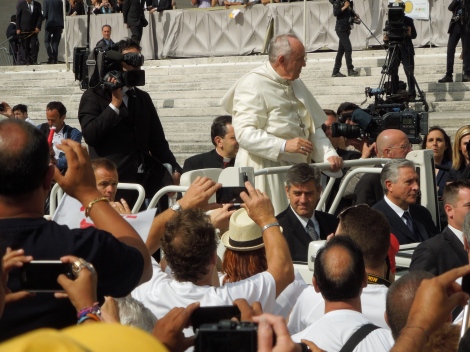 We got settled in and sat waiting. Then the Pope arrived in his Popemobile. Suddenly, it was cheering and crying; a wave of emotion. Pope Francis rode around the audience in circles; everyone had a chance to see him. He immediately struck us as approachable and “of-the-people.” Then he took the stage and people crowded up around him. The guards  instructed everyone to sit in their chairs; there was no standing allowed. Once everyone was seated, the Pope began to speak.

Of course, we didn’t understand a word. We didn’t care. It was amazing just to be in his presence. Then a series of translators took the stage and shared his message with the audience. It was all about family and marriage and not resenting or hurting each other. I felt like he was speaking directly to me.

By the time we traveled to Italy, my ex-husband and I already knew that we were getting divorced, but the trip had been planned for years and we were still getting along just fine. The fact that the Pope spoke about marriage on our first morning there seemed prophetic. At that point, I was still hoping and wishing we’d figure it out. I took Pope Francis’ words to heart. It seemed like a sign.

“When family members and spouses are in discord, it hurts the children.” He elaborated for a few more minutes on that.  “But if you must separate, Jesus will love you and forgive you.”

All I heard was the Pope imploring families to stay together and set aside their resentments. My husband heard it differently.

I mean, my ex-husband.

The rest of the trip was a rollercoaster of emotions. For the most part, we had fun and soaked up the sights, scents, and tastes of Italy. But the Pope’s words stayed with me. I heard him loud and clear.

9 responses to “The Pope Speaks”