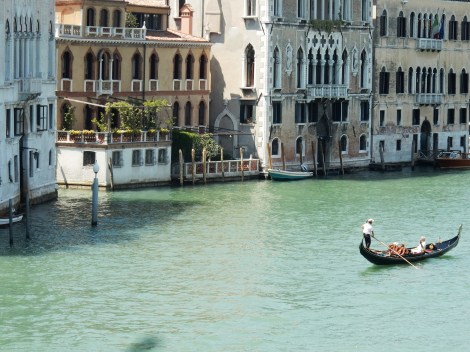 I met a man at a group dinner the other night. We were talking about recent vacations and he said he’d gone to Croatia and popped over to Venice, Italy. He loved Croatia, but hated Venice.

“It’s so crowded. And dirty. I mean, it’s just an island, so there’s no place for the garbage to go. It’s filthy.”

His opinion made me doubt how much I’d enjoy Croatia since I loved Venice. It was not only my favorite city in Italy, but felt like a place I could live.

Which got me to thinking: what is it about Venice that I loved?

The isolation, for one. I love feeling apart from the world. It’s the feeling I get when I set out to sea, or swim in the ocean, or even just drive aimlessly in my car. The idea that no one can reach me is very liberating to me. I don’t know why I never think to move to an island. Obviously, surrounding myself with water seems like my idea of paradise.

Venice is crowded, to be sure. But we managed to escape the chaos of the sidewalks and bridges along the main canal and found plenty of privacy in the smaller alleyways. But nothing was more intoxicating than the privacy of our apartment balcony, where we spent hours every evening sipping limoncello (of course!) and snapping pictures of the tiled rooftops and ever-present sea gulls. We paid a pretty penny for our view, but it was worth EVERY cent. And though we spotted other rooftop balconies, we never saw another soul. It was like having Venice all to ourselves.

When I think of Venice, I think of it being catlike. Lots of winding alleyways, bridges and canals, and places to explore. It’s a place where you can definitely be aloof and hide. It’s a place where you’re just out of arm’s reach — like a cat who doesn’t want to be held. Anyone who wants to find you has to take a boat first, and they’re painfully slow so you have time to crawl to the rooftops and find a cozy corner there.

Do you have an opinion about Venice?