I would venture a guess that most people recognize the iconic Sydney Opera House as soon as they see it. It’s arguably the most famous opera house in the world. But that may change soon. Oslo’s Opera House is gaining international attention and its iceberg-like appearance commands a more thorough look. In 2012, CNN rated the Top 6 Spots for Architecture Lovers and the Oslo Opera House was the only one selected in Europe.

Built in 2007, the exterior of the opera house resembles an iceberg, or glacier, especially as you approach it from the harbor. Suddenly, this white-marbled structure looms ahead, with a smaller icy-looking chunk bobbing in the water in front of it. The effect is by design. The Snøhetta architectural firm used marble, steel, and glass to achieve this cold, angular effect and designed the building to be explored, both outside and in. 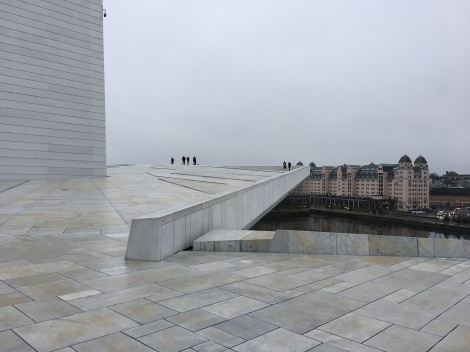 Visitors to the opera house are invited to walk onto the roof of the building, essentially making the opera house an open expanse of art. From the roof or the harbor, visitors can see Monica Bonvicini’s sculpture She Lies, anchored in the water just outside the Opera House. 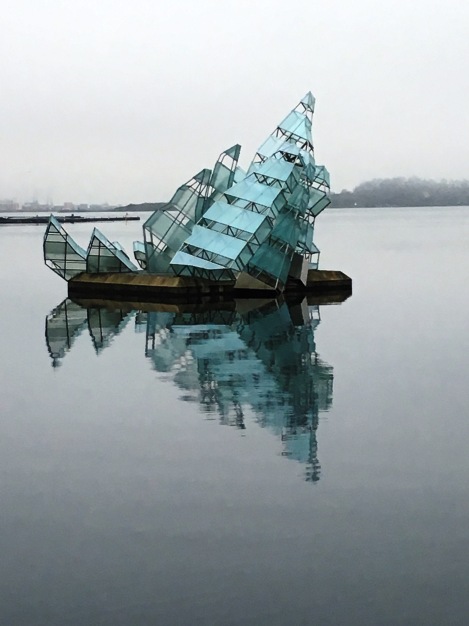 This iceberg sculpture weighs 80 tons, yet floats in the water. Its cork platform is tethered by a chain to cement below the water, allowing the structure to flow with the tides and wind atop the water.

The interior of the Opera House is even more impressive than the outside. You’d never guess by looking at it that this opera house is the biggest art center in the world. I was treated to a tour and got a chance to see how massive and spectacular the space inside is. For instance, would you ever guess that in the center of this building is a courtyard that only the 600 people working inside get a chance to enjoy? Natural light from a hidden courtyard floods the 5 stories of office space, rehearsal studios, music chambers, costume factories, set design, etc. housed inside this busy theater. It’s a fantastic use of space. Probably the envy of theaters everywhere.

I was most taken with the appeal of the iceberg/glacier concept as it fit so well into the landscape of the Norwegian fjords. I chuckled to myself when I saw a cruise ship docked nearby. If it were a foggy day, I wondered if it might look like the ship was heading toward an iceberg as it headed into harbor? If I were the ship’s captain, I’d probably steer toward it as closely as I possibly could (which is why no one would ever let me behind the wheel). I’d have my ready excuse: I was trying to let them enjoy a little bit of the opera, even if that meant that most of the cries came from the decks of both the ship and the roof of the opera house. I can be theatrical, too.

*Special thanks to the Oslo Opera House for the complimentary guided tour.

What buildings do you find to be a perfect fit for their landscape?

6 responses to “An Iceberg Worth Hitting”