They say that if you can see the glacier in the mountain on the train ride to Machu Picchu, that you’ll have good views when you get there. We saw the glacier from the rooftop windows on the train and hoped that the weather would hold once we finally arrived.

It did. The gods smiled down on us and delivered some of the most spectacular views I’ve ever seen. 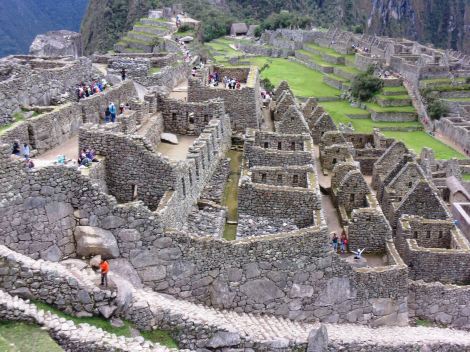 I wish I could tell you all the fascinating facts our guide Margot shared with us, but it would take volumes. I will share a few snippets that you may or may not already know.

I was surprised to learn that it was an American who was largely responsible for bringing the world’s attention to Machu Picchu. In 1911, Hiram Bingham asked some local farmers whether there were any ruins in the mountains around there. They lead him to the terraces they’d been using for farming; the same Incan terraces that date back to 1450 A.D.  Hiram took hundreds of artifacts back to the U.S. to be studied. He eventually came to the conclusion that Machu Picchu depicted two temples, a monastery, sundials and an intellectual center.

The history was overwhelming. Especially layered on top of all the history we’d learned at Ollantaytambo and in the Sacred Valley.

Ollantaytambo was a lesson in giving into altitude fatigue. The steps were steep and our hearts were racing as we climbed up to the temple the Incans were building to the Sun. They didn’t finish before the Spaniards arrived, but what was incredible to behold was that the same houses still exist and have been occupied consistently since the 15th century. First by the Incans, then by the Spaniards and finally reclaimed by the Incans again. A small feat of justice.

It rained while we were in the Sacred Valley, but the views were stunning nonetheless. The piece of history that struck me here was Margot’s explanation of the holes we were looking at in the high hillside before us.

The holes look like pock-marked craters. They are actually tombs. The clever Incans put their dead and their belongings in these holes high up in the mountain across from their homes and impressive irrigation systems. Once their dead were tucked away in those high graves, they destroyed the paths up the mountain so that no one (namely the Spaniards) could loot them. Such a smart idea! Sadly, at some point they were looted. Some bits of pottery and other artifacts of life remain with the bones, but not much. The looters got what they came for.

I could go on and on about the rich history of these Incan ruins. Or rather, Margot could. She spoke with such passion that she brought history and an ancient civilization to life. It was absolutely fascinating and the scenery was breathtaking. As was the ever-challenging altitude. If you go, be prepared for that. Because the altitude and the awesomeness of the scenes before you really will take your breath away.

Do you know much about the Incans?