My day started with a man named Fred Wise, who dropped one cannonball after another into my hand. They were heavy! I didn’t need more than two examples to learn that. Then he put an old musket in my hands. It was heavy, too. It gave me pause; I’d never thought about how hard daily life for Civil War soldiers was. Rough. Heavy. Grueling.  The Crooked Creek Civil War Museum in Cullman, Alabama opened my eyes. And I would have missed the experience had we not pulled off a back road that had a simple “Civil War Museum” sign at the end of the driveway.

The museum was little more than a labor-of-love; an eclectic collection of paraphrenalia that Fred has collected over the years. Most of it has price tags on it, in case you wanted to buy one of the “exhibits.” But it makes sense. That’s how Fred got most of his merchandise, and he freely and eagerly puts it in your hands.

First, we went inside Fred’s adjacent house for coffee. He had more collectibles in there. His house was as busy and cluttered as the museum, and he was more than happy to show us anything that caught our eye.

Like Confederate flags. Confederate uniforms. Horse saddles with holes in them so that soldiers didn’t have to get off their horses to relieve themselves.

This wasn’t a museum full of battle dates and dioramas. This was a collection of antiques gleaned from other Civil War enthusiasts. Even I was fascinated by all the memorabilia as I tried to balance my coffee mug and musket at the same time Fred was putting a Confederate cap on my head. Fred is one of those characters you hope you’ll meet when you’re on the back roads of Alabama: quirky, outspoken, hospitable, and thoroughly entertaining.

Equally interesting was the Bed & Breakfast sitting on his property. He paid $30,000 to have the 1800 homestead taken apart, numbered, transported to his property and re-assembled. We poked around inside and all agreed that it would be a unique experience for sure — if you didn’t mind being in Fred’s front yard where museum-goers, Boy Scouts, and paranormal investigators often stopped by. It reminded me of the night I spent inside a museum exhibit in Belgium. Equally strange, but much less creepy. 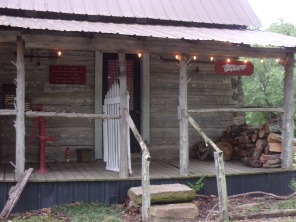 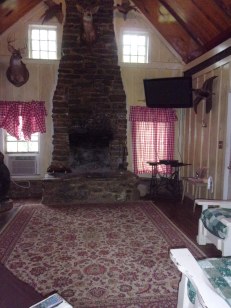 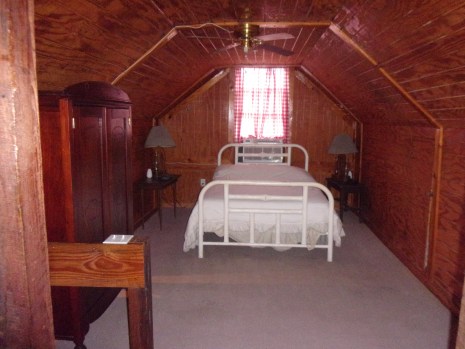 Fred’s Crooked Creek land may be haunted. After all, it’s settled on a battle site where Confederate General Nathan Bedford Forrest and Union Colonel Abel Streight fought for several hours before going on to engage in the Battles of Hog Mountain and Day’s Gap in April, 1863. Ghost hunters have come many times with their equipment. The Boy Scouts who regularly camp on the land are probably more interested in finding shells or bullets around the old rifle pit sites. I was most interested in that Bed & Breakfast. Dare I say that the Crooked Creek Civil War Museum has something for everyone?

Admission to the museum and grounds (and Fred’s house?) is $5.00 at the door. But the experience of spending time perusing all that Fred’s collected? Priceless.

Are you a Civil War buff?