These straw hats represent the hordes of onlookers surrounding a lynching. You can see men in hats in one of the postcards below.

There are atrocities so profound that we can’t make sense of them in any other way than art. Our minds refuse to absorb them, because they are atrocities perpetrated on one person, or people, against another. That’s how I feel when I see exhibits about lynching; that we can only process them in our minds by honoring the victims, in ways that are so profoundly common to us all.

There is the harsh, brutal reality of it; the crowds, the mobs, the witch hunt and power dynamics of it. We cannot deny that. This was the in-your-face uncensored facts put onto postcards. Pictures taken at a mobbed lynching in the South. The mood of the crowd triumphant, as if this were a sport.

Monsters. Animals. People that may still be among us.

The first lynching exhibit I saw was at Cincinnati’s National Underground Railroad Freedom Center. A few years ago, they’d hosted “Without Sanctuary: Lynching Photography in America.” My then-husband and I were curious enough to attend, but were stunned by the brutality of the images we saw.

I wandered the room looking at picture after picture of lynchings. Some victims were named. Others weren’t even noteworthy. People sent postcards with pictures of hanging bodies to their friends or families. As though this had been an event to share with the people back home. 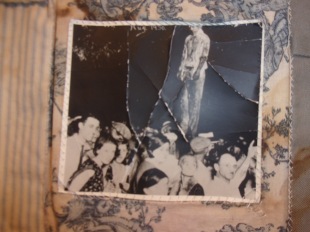 This postcard was sewn to the quilt at the Rosa Parks Museum, but is one that was displayed in the lynching exhibit at Cincinnati’s Freedom Center

From “Without Sanctuary.”Pictures like this inspired the straw hat exhibit

Easier to bear was the current exhibit at the Rosa Parks Museum. Here was a temporary art installment of white shirts stained with blood, dirt, and burn marks along with a handwritten name tag hanging from the sleeve. Though these shirts were fabricated to show the stain of lynching, it was a powerful representation of what it would be like if we had actually collected the shirts of those victims. There was also a quilt. Another exhibition of textiles made in honor and remembrance of those named and unnamed victims.

A tag was attached to each shirt. Many read “Unknown” but included a date and site.

And then there was the dirt. Jar after jar of it housed in a room at the Equal Justice Initiative offices. All different colors from all over the state of Alabama. You’d never guess how different the soil would be — how widespread these lynchings were. To me, each jar represented the handful of soil that would strike the coffin, if there was one. The body, if the body were at least buried. Each jar was so different. And again, the name, place and date of the lynching inscribed on the jars. Some unknown. Just another lynching. Art letting us see the breadth of what happened. How else could we take it all in and try to comprehend it?

Next summer comes the lynching memorial. It is being built in Montgomery, Alabama and may be the hardest hitting of all. And arguably, the most necessary. In this memorial, a block with the name and date of a victim will hang in a memorial site. All 4,000 blocks. We can walk among them, and honor them. Remember them. Make sure that there are no more. Because townspeople and government officials may have turned a blind eye to them, but we won’t. 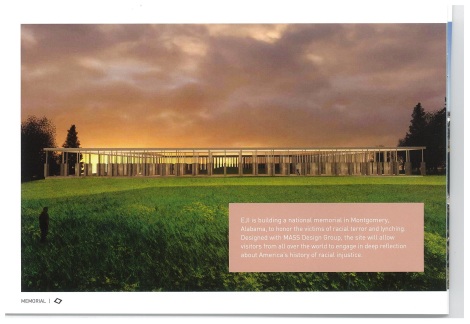 30 responses to “The Horror of Lynching – Expressed Through Art”