Oh, it was easy. Too easy. The only thing easier would have been to gain 10 lbs., but I exercised a little self-control. That WASN’T easy.

I blame Cahawba House. We went there and dived right into all the southern goodies one would expect at breakfast: flaky biscuits with homemade strawberry jam, ham, bacon, and then — a plate of the most fabulous beignets in the world! Even though the plate was set in front of ME, I grudgingly shared them with the rest of our group, and my kindness was rewarded: they brought out more! And the weight gain began.

And I blame her! Janett of D’Road Cafe. We went to this Venezuelan restaurant where Janett brought out plate after plate of traditional Latin foods. We ate until we couldn’t eat any more and were so foolishly full that we could barely eat lunch a few hours later. I gained at least one pound here.

Mayor Todd Strange met us for lunch at Central. It was a fantastic restaurant that puts a modern twist on southern favorites. I tried chicken gizzards that were out of this world! And topped that off with pimento cheese with flat bread. Definitely worth another pound.

Vintage Year in Cloverdale didn’t make it easy, either. This fine dining establishment boasts steaks, seafood, cocktails and desserts, and I enjoyed them all. Add another pound. 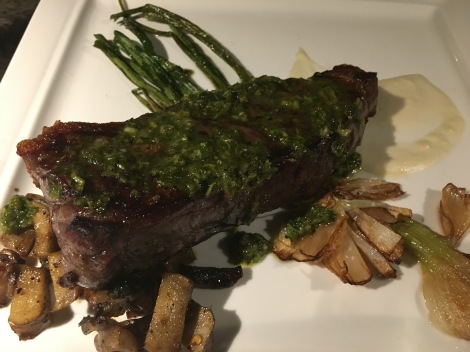 But I think the Capitol Oyster Bar is what pushed the scale over the top. I cannot resist fried oysters. Especially when you eat them outside next to a river as you listen to great live music. I ate more oysters than anyone has a right to.

But really, who I should blame is E.A.T South (Educate. Act. Transform.). This community garden project on donated land near an old train yard grows many of the ingredients found at each of these restaurants. They’ve made the farm-to-table experience too good to pass up.

Southern cooking is too good to resist. I’ll consider myself lucky that I escaped Alabama with only five extra pounds. It could’ve been worse.

Do you have a favorite southern dish?