Usually I’m glad when they’re decidedly NOT like America. I love a culture that embraces its heritage, and values. I feel so lucky to witness a different perspective. But I couldn’t hold my tongue completely when I visited Trinh Nu Cave (Virgin Cave) on a Halong Bay Full-Day cruise.

Halong Bay is a UNESCO World Heritage Site. It took a 3-hour bus ride from Hanoi. I secretly love these long bus rides because I have hours of window-gazing in the countryside. I see things I expect to see, and so many more that I don’t. I snap pictures, but think too late of videotaping, or know that I can’t capture the unexpected because by its very nature — I don’t know when it’s coming. But I save the memories in my mind and capture the those other things with photos.

Like these. The most-photographed scenery in the world. Halong Bay, Vietnam. It’s almost impossible NOT to take picture after picture while you’re there. 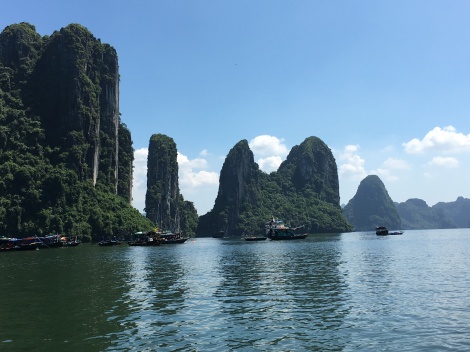 I loved being on the water with these limestone peaks bubbling up like beautiful jewels. And the boats. Fishing. Leisurely bobbing. Carrying people from all over the world there to see this amazing spot on the planet.

As if that weren’t enough, there are caves.

We were rowed through these caves by women fully covered in protection from the sun. No wonder these women have such beautiful skin. They care for it. I strove for comfort despite the wear & tear, instead.

And then, we cruised over to the cave and disembarked from the boat again to climb up into a cave discovered there in 1996 when people noticed monkeys disappearing into a hole in the mountain. Inside was a jewel box of stalactites and stalagmites that the Vietnam displayed in an even more spectacular show by shining lights on the cave walls.

It was all so exotic. A unique way of looking at the splendor of nature.

But the cave was wet, and there were no handrails. So every single person was running their hands along the caves walls and grabbing the cave walls as a handrail.

I live near Mammoth Caves and visit caves in so many different places. I couldn’t help myself. “I’m surprised we’re allowed to touch the cave walls,” I said. “We’re not allowed to in the U.S. It turns the stone black.”

“Yes,” he nodded as he lead us further into the caves. “We touch it for luck.”

And I cringed because I wanted to see the cave preserved. But I pressed my fingers against the walls, too, when I needed a handhold. I like to feel the texture of the walls, but I felt torn between keeping the cave pristine like a collectible toy kept in its original package, or playing with it even if it meant it might lose some of its future value.

Have you ever experienced culture clash, big or small?

8 responses to “Culture Clash in the Cave”