In a time when human lives meant nothing; when millions were exterminated without a second thought, Oskar Schindler risked his life to save as many Jews as he could. It couldn’t have been an easy choice, and was undoubtedly a calculated dilemma since he was, in fact, a Nazi. His identity as such undoubtedly hurt or helped him. He couldn’t have known for sure. But he took a chance.

This is when character shows. When we see the monumental humanity expressed during the most horrible of times.

I visited the site of the former Oskar Schindler Factory, stopping at the square where the Jewish ghetto wall once stood. Now there is a display of 63 chairs set in rows in this common park space. Each seat represents 10,000 Jews imprisoned there. If you can imagine that. But you can’t, really. 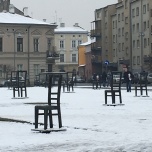 Once I entered the Schindler Factory Museum, I was taken through the timeline of the war, the rise of Nazi power, and what life was like for the Polish Jews of the time. 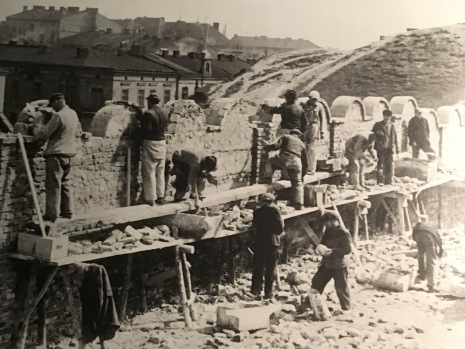 A few interesting facts about the man:

Toward the end of the museum exhibit, there is a small room with pictures of those Schindler saved. Some are pictured here, but I couldn’t capture them all.

I left the museum wanting to watch the movie again. It’s been so long. It’s one of many movies that depict a unique perspective of the Holocaust. It is one of my favorites.

Which Holocaust movies made an impact on you?