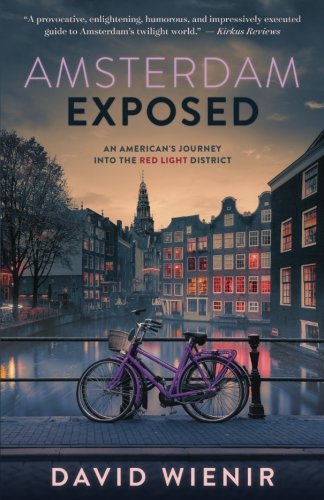 I’ve been to Amsterdam and like most tourists, I curiously wandered to the Red Light District. And then quickly wandered back out. I was like so many tourists David Wienir describes in his travel memoir AMSTERDAM EXPOSED who excitedly want to take a peek, but are soon uncomfortable with the seediness of the women beckoning men from their windows.

I probably only saw five or six windows before I turned around. Wienir, on the other hand, strolled through the Red Light District almost every day of his stint as an exchange student in 1999 Amsterdam.

Fascinated by the women in the windows and determined to learn more about them as human beings, not just sexual objects, Wienir embarks on a quest to befriend some of them and write about their forays into the world’s oldest profession. He is immediately met with scorn as he tries to talk to the working women. Door after door is slammed in his face. Until he meets Emma, who reluctantly agrees to talk with him.

She stands him up over and over again, but he persists in trying to connect with her. Finally, she agrees and Wienir talks to the Dutch prostitute for hours one night at a bar. He has vowed not to have sex with any of the prostitutes in Amsterdam as he doesn’t want to taint the story he tells. Not surprisingly, though, he falls in love with Emma. He deems her a hooker with a heart of gold, much like Julia Roberts’ character in Pretty Woman (though Emma is not just starting her career in the sex industry, and she freely uses drugs). I think Wienir wanted to make her out to be more wholesome than she was — which ultimately fulfilled his fantasy of what the backstory of a prostitute might be.

He freely admits that Amsterdam’s prostitutes succeed because they entertain the fantasies of their customers. That is what they’re selling: fantasies. And Wienir realizes his fantasy by the end of the story.

I found the descriptions of Amsterdam to be spot on. The scene he paints of 1999 Amsterdam is exactly how I remember it. Wienir often takes groups of his fellow law students through the RLD and observes their discomfort as they wander through the narrow alleys just steps away from many of the working women standing half-nude in their doorways. If you’ve ever been to Amsterdam, you’ll feel like you’re there again. And if you haven’t — here’s your first glance at this timeless European city.

Despite Wienir’s predictable infatuation with Emma, there were several observations he made that were very insightful about the sex industry and the human psyche. For me, his comparison of the desensitization of sexuality and nudity to noncommital online dating today struck a chord. Of course, Wienir describes it much better than I can:

When you live in a city where you can have sex with any number of beautiful women anytime you want, for $25, something changes on an evolutionary level. With such easy access, even if one doesn’t indulge, the pursuit ends. There’s no glory in the conquest. There’s no chase. The mind is allowed to go elsewhere…

…The necessity and urgency for sex fades. For others, it’s the opposite. Their mind goes into overload and unleashes a veritable feeding frenzy. The phenomenon is similar to what happens to many guys on the Internet, through sites such as match.com and others like it. They just can’t get enough. Women become disposable…

I found this insight fascinating. There were many passages and observations that Wienir made in AMSTERDAM EXPOSED that drew me in. I read the book in a single day. I knew he would fall in love with his prostitute, but I didn’t know why. But maybe that’s because it’s not my fantasy, nor my story to tell…

Have you been to Amsterdam? What did you think about it?