The thing that surprised me most about my trip to Spain was how enraptured I became with El Toro — the bull. I’ve often wondered what it would be like to watch (not participate in) the running of the bulls, but beyond that, I’ve never given bulls much thought.

Until I went to Spain, and they basically became an obsession.

I was constantly reminded of bulls as we traveled the countryside. Big, black silhouettes of bulls dotted the hillside and our tour guide explained that they were originally a little bit smaller and were put up by the Osborne sherry company to advertise their liquor.

Now, law prohibits advertising on the bulls, but they’ve become so iconic that the bull is recognized as a symbol for Spain. Why is that? How integral is the bull to Spanish culture?

Perhaps it has something to do with preserving tradition. There was a time when Spaniards congregated at the bullrings to watch the artistry and savagery of bulls being slain. They embraced it as sport. They cheered. Nobility sat front and center to watch the bulls buck and jerk before they burst forth from the stalls and charged onto the field. There’s a part of me that would have loved to experience that.

But as Spain moves into the more politically-correct modern world where bullfighting is seen as nothing more than animal cruelty and senseless blood lust, the symbol of the bull must undoubtedly bring forth new imagery. How do we think about it now, in this current world where we are outraged at the senseless killing of 6 bulls each night, while still trying to recognize that bullfighting is a huge part of Spanish heritage? (I have an easy solution: fight the bulls, but don’t kill them.) 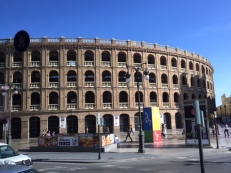 The bullring in Valencia

In Barcelona, bullfighting has been banned since 2011 and the bullring has been turned into a shopping mall. In other regions, bullrings house museums. But they also still hold bullfights in many Spanish cities. One of the most renowned is at Salamanca. I didn’t go there; couldn’t stomach it. But I so badly wanted to see what the lure of bullfighting is all about.

Instead, I toured the bullring museum in Seville, where I learned about the history of bullfighting and matadors and its place in Spanish history. I also got to walk out into the yellow-dirt ring and imagine the crowds circling around as man vs. beast fought to the death.

I’ll never really be able to imagine it. I’ll never be able to bring myself to watch or support something so barbaric. But for better or worse, the image of bulls and bullfighting are entangled in my mind with the intensity that is Spain.

How do you feel about bullfighting?