Aura Photography has been described as “fascinating but inexplicable.” I can attest to that.

After four hours of driving up I-75 into Detroit, Michigan, my daughter and I headed straight to Aura Aura to have our radiant aura photos taken. It had been a long ride, full of meaningful conversation and our favorite music, and I wondered whether our immediate moods were what would show up on the photos, but Eileen Lee of Aura Aura Detroit assured us that our auras weren’t as fleetingly changeable as that. Yes, they might change from reading to reading, but depending on our personalities and how much our moods fluctuate, our auras may never change much at all.

With that in mind, my daughter headed into the spherical tent for her photo. She placed her hands on metal plates with sensors on them and then Eileen snapped her picture. It took all of 30 seconds and then it was my turn. I followed suit and then we sat outside the sphere with Eileen as she explained a little more about aura photography and answered our questions. Part of the conversation was simply that — conversation. She got a sense of what was going on in our lives and then it was time for the big reveal. She peeled the cover from the instant photo and we saw my daughter’s aura first.

It was completely red. 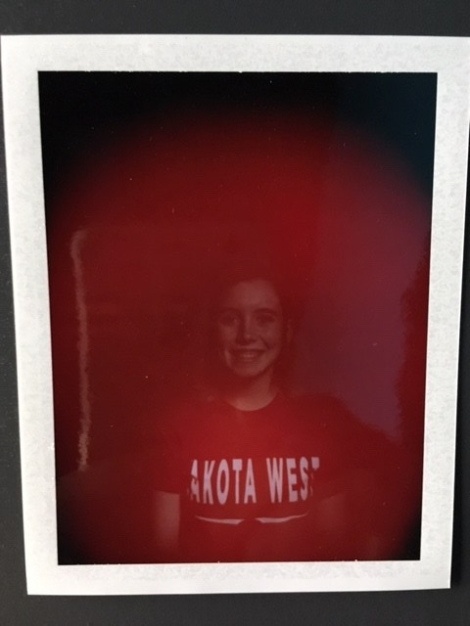 She was surrounded by a red ambiance and almost looked like she was in a cloud. So what did red mean? It signified that she is very passionate and emotional. She thinks with her head and her heart all together. She has strength and leadership and vitality. Most importantly, it signified new beginnings, and as a college Freshman, nothing could be more correct than that. She is a very emotional, strong spirit. If her aura had shown anything else, I would have been surprised.

Then it was time for my reveal. Eileen pulled back the cover and we saw that my photo was completely different and full of color. Whereas my daughter’s aura had enveloped her like a bubble, mine was more segmented and as Eileen shined a flashlight on the picture so we could pick up all the nuances, she explained what each meant.

You may notice the yellow arch above my head. Yellow signifies that I am Optimistic, Enthusiastic, Open-Minded, Loves Variety and Freedom, Generous, Playful, Whimsical. I don’t know. Does that sound like someone who heads to Detroit for aural photography? 🙂

My yellow arch is capped by a green border. The position indicates that this color is my present energy in the moment, and the color denotes that I was focused, nurturing, dedicated, interested in groth and healing. That sounds about right, too.

There were a couple more subtleties to my photo that are harder to see without shining a light on the photo, but you can see dark red splotches on either side of my body. Those convey some low energy; energy expended and current. Makes sense after a four-hour drive at the end of a draining work week. There is a swath of blue over my heart: Depth of Feeling, Trust, Devotion, Loyalty, Nurturing, Personal Relationships, Supportive, Intuitive, Sensitive.

All in all, I’d say mine is every bit as accurate as my daughter’s. 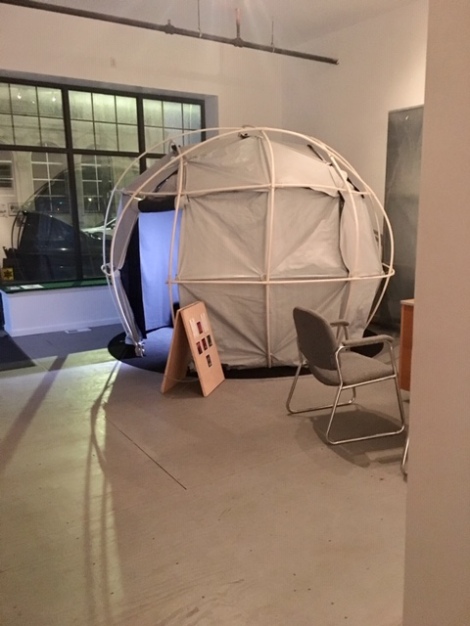 So, how does it work? Being inside a sphere is thought to enhance energy. The photographer uses a more modern Polaroid camera that takes a double exposure of your portrait and then the aura which occurs because of the silver-laced hand sensors that sit in your lap, sending a charge through your body.

I’ll admit, I was something of a skeptic, even though it was my idea to go. But I was curious, too. I wondered whether the film was already damaged or overexposed or something in some way so that each picture would show a different “aura.” I was willing to admit that maybe this was all nonsense. BUT — if my picture had been the one to show up red, it wouldn’t have made ANY sense. I’m not an emotional person and emotion/passion does not rule my life. I am much more logical and questioning than that. Conversely, while my daughter is a very optimistic person and my aura picture might have fit her, the absence of all that red wouldn’t have made sense for her.

Of course, you can choose to believe it or not, but you have to admit, aura photography is fascinating. And inexplicable. And something I’ll continue to ponder as we enter a new year and new beginnings.

Any idea what colors you think yours would show?

24 responses to “Entering 2019 With an Optimistic Aura”