What is the Heidelberg Project?

What is the Heidelberg Project?

I cannot describe the Heidelberg Project’s background any better than it is described on its website, so will share that history here:

In 1986, artist Tyree Guyton returned to Heidelberg, the street where he grew up on Detroit’s East Side, and found it in shambles, riddled with drugs and deepening poverty. Bruised by the loss of three brothers to the streets, Guyton was encouraged by his grandfather to pick up a paintbrush instead of a weapon and look for a solution.

Armed with a paintbrush, a broom and neighborhood children, Guyton and Grandpa began by cleaning up vacant lots on Heidelberg Street. From the refuse they collected, Guyton transformed the street into a massive art environment. Vacant lots literally became “lots of art” and abandoned houses became “gigantic art sculptures.” Guyton not only transformed vacant houses and lots, he integrated the street, sidewalks and trees into his mammoth installation and called the work, the Heidelberg Project (“HP”).

My daughter and I headed out to see this art collection for ourselves on a bitterly cold Saturday afternoon in Detroit. Not knowing what to expect, we thought we’d drive down the street and take a look. But as soon as we saw the festival of colors and painted houses, we knew we needed to get out of the car and explore.

Street view of the Heidelberg Project

It was freezing cold, but we had to. Learn from us and try to go on a warmer day. You’ll want to spend hours there! It’s hard to take it all in. Everywhere you look, there is another eye-catching pile of rubbish to decipher. There were Dali-esque clocks all over the place. We tried to make sense of them. Were they all depicting the same time? No. Were they representative of events there? We didn’t know. 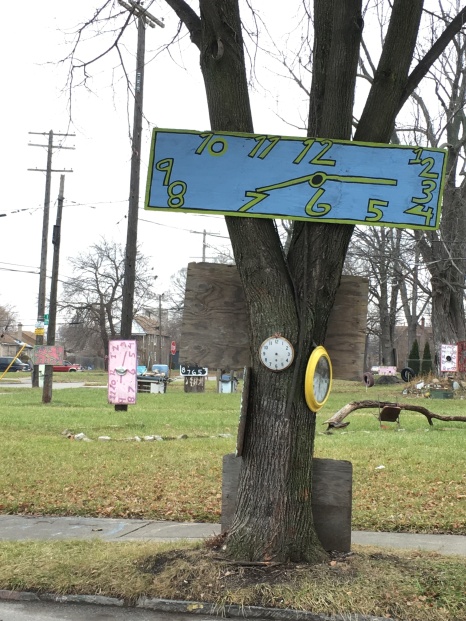 We later learned that the clocks are reflective of Plato’s quote that, “Time is the moving image of reality.”  Tyree Guyton explains in a short video that we must create our own realities out here in the real world. The clocks pay homage to this idea.

I’d read that there are typically volunteers in the information booth there to help answer questions, but no one braved the cold with us that day. We had Heidelberg Street all to ourselves.

Recycled art- a half-buried van at the Heidelberg Project

There were piles and piles of toys.

Recycled art piles of toys at the Heidelberg Project

There were broken-down appliances shrouded in mishmash debris.

Recycled art-appliances at the Heidelberg Project

There’s no way to take it all in. And it keeps changing. Guyton talks about the power of art and how transformative it is. He has brought art to this neighborhood that might have never been noticed before. He brought the world to Detroit and they see its history and its people reflected here. What my daughter and I saw there might not be what you see when you go. As Guyton points out, we have to open ourselves to change. The Heidelberg Project keeps changing; keeps growing. It has survived 30+ years in a tough town. The people of Detroit made that happen.

We live in a world where a lot of us are afraid to see the beauty that exists amongst chaos.

How does the Heidelberg Project make you feel?

The Heidelberg Project can be found at 3600 Heidelberg Street, Detroit, Michigan.

Recommended hours are 8am – 7pm.

12 responses to “From Shambles to Street Art: Detroit’s Heidelberg Project”