If you never heed another word of advice from me, I hope you’ll consider this when you travel someplace new: take a food tour! Take it as soon as you can after arrival. You’ll be glad you did.

What’s the advantage to taking a food tour right out of the gate? For one thing, you’ll never have to wonder where you should eat. You’ll get a smattering of the local specialties and you’ll have some idea of the places you want to return to during your trip.

I wish I’d heeded my own advice, but the Food Fan Foot Tour that I wanted to take with Asheville Food Tours was only open to me on a Sunday — toward the end of my weekend getaway. Which was also the day after my daughter and I wandered for hours in search of a restaurant with a wait time of less than 2 hours the night before. We ended up eating pizza at Manicomio’s because we were famished and it was the quickest thing we could do. Our tour guide did recommend that pizza place the next day even though it was not a part of our actual tour, so we did feel better. But if I had taken the food tour first, I would have known to squeeze a lemon over top of my pizza at Manicomio’s.  These are the gems of wisdom that you can only get with a good guide.

Stu Helms was the perfect person to lead this tour. Helms moved to Asheville years ago and began blogging about the food scene there. He became very well known in this foodie town filled with James-Beard nominees and chefs began to look for Asheville’s “Food Fan.” As Helms became more well-known, he began receiving invitations to events like food tours. After he took a tour with Asheville Food Tours, he asked them whether they’d be interested in having him join their team. Helms put together his own itinerary of rotating favorites among the Asheville food scene and made sure that no one would go home hungry from his tours. I can certainly attest to that!

We made 7 stops altogether, beginning with a nice chardonnay and prosciutto, artichoke and arugula flatbread at Rustic Grape. The first stop on a food tour is always a bit of overstimulation. You’re given a taste of something exquisite that you could happily consume until your belly is full, but you know you have to use restraint and leave plenty of room for several more goodies over the next two hours. I was already wishing I had time to go back to Rustic Grape and have more of the flatbread at another time. 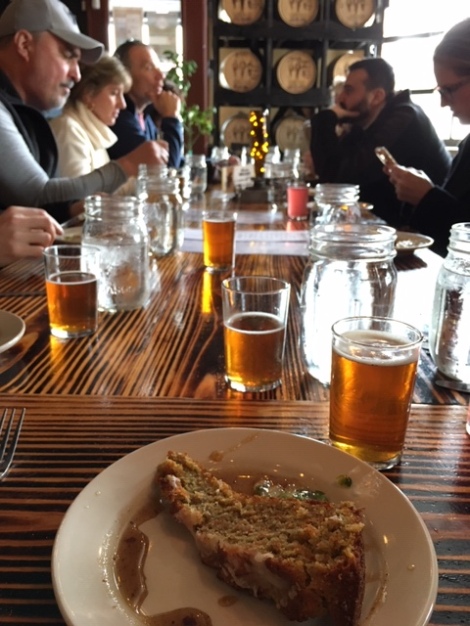 Bhramari Brewing Company was so much more than just a microbrewery. Here we tried the Painted Fortune Lager, so named because it is brewed with a special corn grown by a local farmer named Fortune. It was scrumptious and paired with a cornbread made from carrots, not corn, and drizzled with maple syrup and a jalapeno gelee. So many flavor profiles already! And we were only at Stop #2.

Our next stop was at The Rhu – a bakery downstairs with the more complete and separate Rhubarb restaurant above. The James Beard-nominated chefs at these restaurants promote the Cocina Povera movement, which translates to “kitchen of the poor.” They specialize in an Appalachian style of cooking which complements the region in which Asheville sits. Notoriously poor and reliant on only what is available there, Cocina Povera plays to the idea of no food waste and a scarcity of ingredients.

Chef John treated us to a cornbread soup made with simple ingredients and flavor profiles that are surprisingly offered very few places: cornbread, buttermilk, and onions. My Appalachian ancestors would LOVE this! I know I did.

Then we were treated to my favorite treat of the day: savory pot pie fritters. Again, the chef created a masterpiece with the idea of “no food wasted.” They’d featured roasted chickens that weekend and the pot pie fritters used up much of the leftover chicken in a rich bechamel sauce. I could have happily eaten nothing but these fritters all day. It made me sorry that we hadn’t waited two hours for a table at Rhubarb the night before. The food here is that fantastic.

Aux Bar (formerly the Blind Pig) is another Asheville hot spot that strives for no waste. They exemplify southern cooking and the concept of using every part of the pig. You may find a pig brain mousse, pig ears, oxtail stew, etc. on their menu. We were treated to smoked pork shoulder and a Jaegermeister sangria. Both were heady with flavor.

There is more to the Asheville food scene than Appalachian and Southern cooking, of course. Our next stop was at Strada –  an Italian restaurant where we were almost too full to even try the homemade wilted arugula-stuffed ravioli drizzled with balsamic vinegar. Almost. I was perfectly willing to be uncomfortably full at that point.

The food was too good to pass up, and we only had one more stop after that: 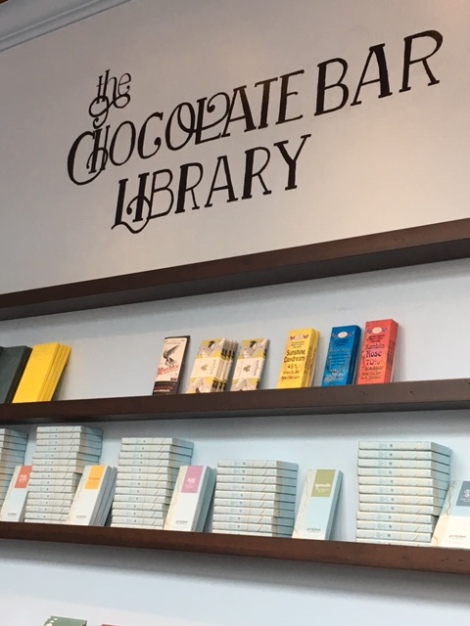 Dessert at French Broad Chocolate Lounge. There are two locations now in Asheville, but you’re sure to see a line out the door at either place. The owners here have cacao crops in Costa Rica and import their own chocolate. They’ve grown so much that they now import other chocolates as well, but you can be sure it’s all of the highest quality. If you want to skip the lines, you can head around the corner where they sell chocolate bars.  But if you’re a chocoholic, you won’t mind waiting in line for the gooey chocolate-y creations they offer in their cafes.

Asheville is definitely a foodie’s dream. With a number of James Beard-nominated chefs playing with local ingredients and flavors, tasting your way through Asheville is a pure treat. I was thrilled to follow Stu Helms on his culinary adventure. I’m now a fan of Asheville’s “Food Fan” and plan to head back there again to try all the places I missed.

What’s the food scene like in your part of the world? Could you put together a food tour in your area?