As sacred and miraculous as the visions of Mary were in Fatima, a vision of Jesus in a Lisbon cathedral resulted in death.

During the 16th century, many Jews were exiled from Spain. Those that gathered in Lisbon were renamed “New Christians” and probably should have acted as such, but hindsight is 20/20.

In 1506, a Christian attending mass at Igreja de São Domingos cathedral saw a vision of Christ. One of the New Christians pointed out that this was simply light reflecting through the stained glass window; not the miracle that the Christian(s) believed this vision of Jesus to be. Infuriated, the priests at the church ordered the New Christian beaten to death and all the other “New Christians” to be killed for heresy. It was a massacre of 2,000 Jews within two days.

Later, those priests were condemned to death, but the curse of Igreja de São Domingos seemed to continue:

—  Igreja de São Domingos was the site where those condemned during the Portuguese Inquisition were left to be burned alive.

—  A powerful earthquake in 1755 destroyed everything but the altar and sacristy.

— The church was rebuilt, but then caught fire in 1959. After that, the powers that be decided not to rebuild. They left the damage from the fire intact, but continued to hold services there.

Walking into this cathedral is a very different experience than most others in Europe. You can see the grandeur that was once displayed there, but now there are also scorched walls and evidence of decay. Services continue to be held there and it’s a common gathering spot for Africans living in the area to congregate. It’s a place that keeps resurrecting itself. 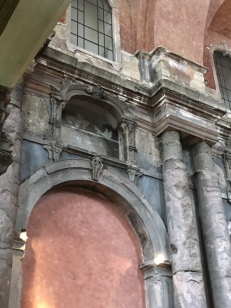 I found it a fascinating structure that refuses to hide its tragic history. Unlike other cathedrals, it was not a place of beauty and gilded offerings to Christ; rather, it was a dark reminder of all that has happened through time. The church still stands. So does its history — as dark as it is.

Do you know of other places of worship that show their scars?

2 responses to “Another Vision in Portugal — This One Deadly”