The view from Nazaré’s sitio

It didn’t matter that I only put my feet in the water in Nazaré, Portugal. My entire body has been in the Atlantic Ocean many, many times. But the ocean is  a little different in this point on the map where professional surfers break World Records. I was more than a little awed by my stop in this town.

First, a little history into this charming seaside town.

As in Fatima, a vision of the Virgin Mary plays into Nazaré’s history. Legend holds that in 1182, a nobleman was hunting a deer on horseback. As he chased the deer on the Sitio of Nazaré (the clifftop area), he realized that the deer had plunged over the edge and that he was destined to do the same. Then, miraculously, the Blessed Virgin appeared before him and his horse was able to stop before they followed the deer’s demise over the cliff.

Grateful for his miraculous survival, he ordered a chapel to be built on the spot where he was saved. Beautiful tiles inside tell the tale and more recently, a statue along the road to the lighthouse pays homage to that part of Nazaré’s history along with its modern-day fame as having some of the biggest waves in the world.

Several world records for surfing (both men’s & women’s) have been set here. I wish I had a postcard of the picture I saw inside the lighthouse/surfing monument at the top of the cliff. In that picture, you can see a gigantic wave coming toward the lighthouse, ready to engulf it completely. The waves get to 100-ft high here! 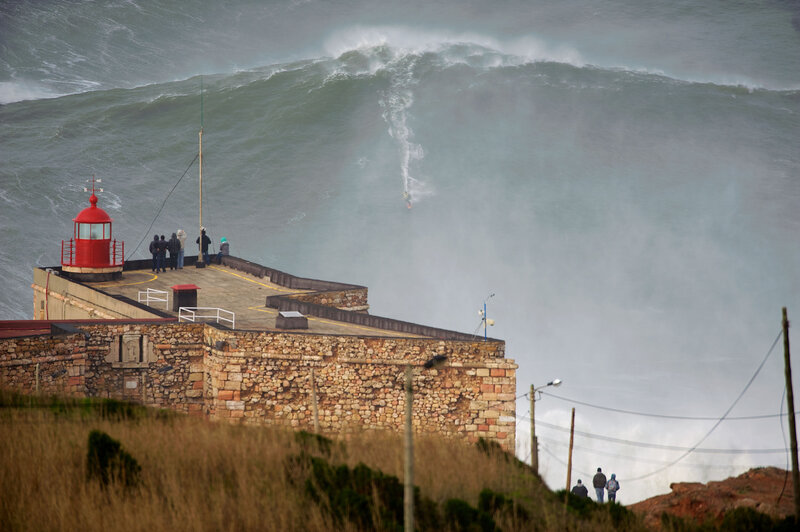 Here’s the famous picture of Garrett McNamara riding the wave toward shore. This lighthouse is on top of the cliff overlooking my earlier snapshot of the beach below!

Why? Why is Nazaré home to some of the world’s biggest waves? It has to do with the canyon beneath the ocean off the point here.

At its deepest, the Nazaré Canyon is 16,000 feet from the ocean’s surface, compared to the Grand Canyon’s depth of 6,000 feet at its lowest point. What this means is that as these deep waves roll in along a 130-mile long canyon funnel, rather than dissipate as they encounter a gradual shallow ocean floor,  the large waves hit shallow ground closer to shore, pushing the water higher with the impact.

Garrett McNamara, a Hawaiian surfer, rode in on a 78-foot wave in 2011, setting a world record. It is believed he surfed in on a 100-foot wave as well, though it was argued that there was no concrete measurement of the wave. In 2017, Brazilian surfer Rodrigo Koxa was recorded as the world record coasted in on an 80-foot. He braved this after a near-fatal surf in the same spot three years earlier.

Only the most elite, experienced surfers can surf Nazaré’s North Point. It requires special wet suits and jet skis to take the surfers out into the ocean. It would be virtually impossible for surfers to paddle out to these fast-moving waves.

These waves are dangerous! They have been known to kill or injure both surfers and beachgoers alike. Many surfers have suffered concussions, broken bones, black eyes, and near-drowning in Nazaré. Surfing is always dangerous, but with these fast-moving big waves, it’s even harder to get out of harm’s way, and all too easy to get dragged beneath the water for minutes at a time.

Portuguese inhabitants of Nazaré know to stay away from the beaches in winter when the waves get high. Perhaps the Blessed Virgin Mary will watch over them, like she did the nobleman who almost plunged over the cliff in the 12th century. But there’s no guarantee of safety when you face Mother Nature in one of earth’s most dangerous places. Only the most experienced surfers even try.

Are you drawn to extreme sports?

19 responses to “The Big Waves at Nazaré”