I should begin by telling you that I landed in Riga at 11:00pm along with four other jets at the same time. The tiny airport was more chaotic than it usually is, apparently. It took nearly 40 minutes for my luggage to appear on one of the two luggage belts, and it was a toss up the whole time as to which belt it would appear on.

Bag in hand, finally, I headed outside to get a taxi. Unlike in other European cities I’ve traveled to, there was no queue for taxis; instead it was a free-for-all among the masses holding their hands out to grab a cabbie’s attention. There was no rhyme or reason as to why each taxi chose his/her passengers. We were all eager to get one of the official taxis (Baltic cab) and shell out the 15 Euros for the trip to the city center. It was late. We were tired. And the throng of people clambering for taxis just kept growing.

Fed up, I walked across the official taxi lane and decided to take an unofficial taxi. Those were in high demand as well. Most people bartered for a flat fee before they even got in. I would have done that, too, except that I just didn’t care anymore. I was exhausted. I just wanted to get to my hotel and only cared that the taxi took credit cards. With that assurance, I climbed aboard.

“Why are you in Riga?” my cabbie asked.

“I’m attending a conference full of travel writers. We’re all here to learn about Riga and write about it.”

“What are you going to write about?”

“I don’t know yet. I’m going to Rundale Palace, but other than that, I don’t know what I’ll see. What would you recommend?”

My cabbie paused to think and then surprised me with his answer. “I have thought about writing about this before. I would write about the Soviet buildings and how Latvia is still old and new. About 80% of the buildings are still Soviet-style. That’s where most people in the city live. You could write about that. And go to Cafe Leningrad. It’s like a Soviet bunker and has old things from that time inside. They have good burgers, too. You have to look for the sign outside. It’s in Russian.”

And with that, I paid my inflated 28 Euro cabfare and thanked him for all his information on what he would find interesting about Riga to an outsider. Little did he know I’d take him up on his ideas.

When my son and daughter-in-law arrived in Riga the next day, they were hungry. I told them I knew just the place. I’d gotten directions from the hotel clerk and we wandered a few blocks until we stood at a corner and I said I thought we’d arrived. 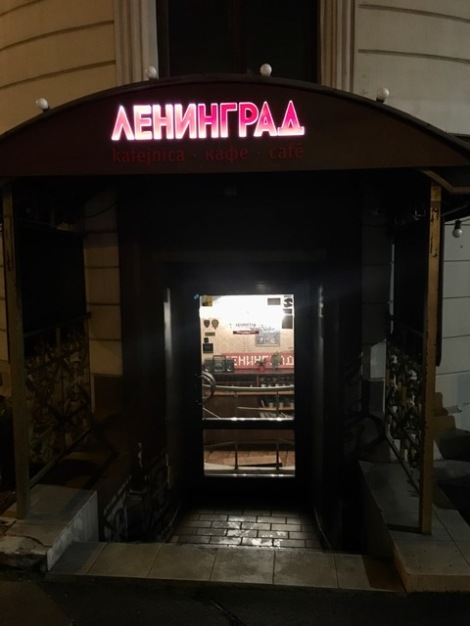 I smiled. He speaks and reads Russian. I’d chosen this spot just because of him. We wouldn’t travel into Russia during our trip, but I wanted to give him opportunities to use his language skills as much as I could while we were so close.

True to my cabbie’s word, we did step down into a cement bunker-ish room. There was a dining room to our right, or a more atmospheric bar to our left. We chose the bar. 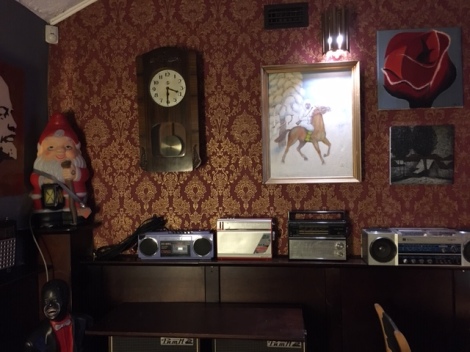 Transistor radios lined the walls. Old books, posters, and kitschy paraphernalia from the time adorned the place. An old television stood alone in the lobby. I loved the cozy atmosphere. Then I stepped up to the bar to place our order. 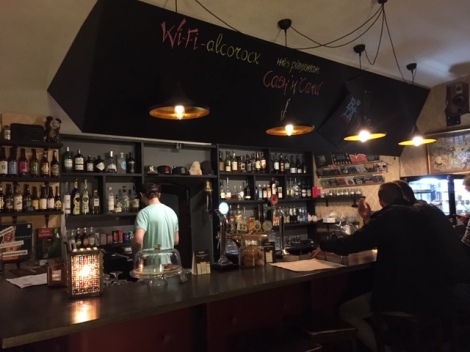 We’d each chosen burgers. I pointed to the first one on the menu and the bartender breathed a heavy, beleaguered sigh.

“Do you have time?” he barked at me. I wasn’t sure what he meant, Was this some kind of specialty item along the lines of ordering a souffle? I said yes, we had time. Then I continued on with our order.

“Wait. Wait.” he laboriously wrote down our order. Each burger had a one-word title, but it took a while. “Is this all the food?”

“And we want drinks.”

“I said food! Drinks are not food.”

I couldn’t help but think of the Soup Nazi on Seinfeld. I waited a moment while he ran the order back to the kitchen and then came back to take our drink order. Then pour the drinks. Then write it all down again while he checked the menu over and over for prices. Meanwhile, the line behind me to order drinks and/or food was about eight people long.

I paid and took our drinks to the table. About 10 minutes later, our burgers came out. I think my transaction took longer than it took to cook the food. But that didn’t matter. The burgers were fantastic; a blend of beef and pork with tasty toppings, potato crisps, and a shot of vodka. They came with the burger. 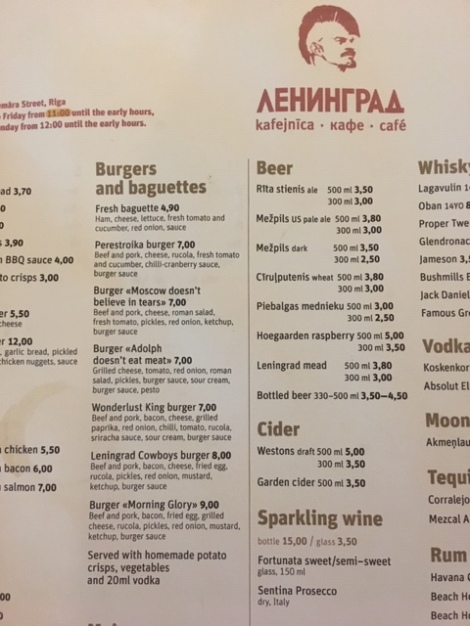 The food was cheap. The drinks were cheap. The beers were good, and the service was — exactly the experience I’d imagine in a Soviet-style bar.

I loved the place. I loved the bartender’s brashness and the throwback to 1970’s/80’s kitsch. If I lived in Riga, I think I’d be a regular there — whether the bartender wanted me to be, or not.

Have you ever taken the advice of a cabbie? How did it turn out?