The world is a strange, strange place these days. The effect and surrealism of the global pandemic seems like the stuff of pulp fiction. Something based on the possibility of what might happen, but not really something that could happen. And yet it has.

That’s how I’ve always felt about the possibility of going to Nepal. It doesn’t seem like a location on this earth that I might ever inhabit. I’m not a mountain climber. I don’t have a death wish. I’m afraid of heights, get dizzy at high altitudes, and don’t have even one iota of interest in climbing a snowy mountain range.

Traveling to Nepal seemed about as likely as there being a global pandemic… until I read a few blog posts from blogger friends of mine who weren’t mountain climbers, either, but decided to go to Nepal.

Things to Know About Traveling to Nepal

Ashley Hubbard, creator of Wild Hearted, is not a trekker. Neither am I. It was through her posts that I realized that climbing Mount Everest isn’t the only thing to do there. She wrote about a jungle safari in Chitwan National Park and ways that travelers can travel responsibly, support local people, and be kind to the environment while there. I especially liked her travel tips and guidance on adhering to local customs. It’s hard to know the do’s & don’t’s before you visit such a foreign place, but she’s made it easy. She says Nepal is now one of her favorite countries. That certainly comes through in her posts. You can read her Nepal posts here.

Sarah of Endless Distances is a little more adventurous than I am. She chose to trek Everest base camp and did some training before going. On her blog, she’s included a video tutorial of how they trained and has provided an extensive packing list — so essential for anyone undertaking this adventure. But it was her accounts of restaurants, sights to see, and Kathmandu that really inspired me to consider Nepal as a destination.  I’m not sure I’m up for trekking base camp. You can decide if you are by reading her Nepal posts here.

As I researched places I wanted to experience in Ann Arbor, Michigan, I discovered a restaurant there called Everest Sherpa. It seemed like the idea of Nepal was getting more and more pervasive. I took this discovery as a sign that I needed to visit this restaurant on my Ann Arbor trip. They serve Tibetan and Nepalese food, and I stopped to consider those words. Did I have any idea what their Tibetan or Nepali food would be? No. But I did know the tastes would be authentic. 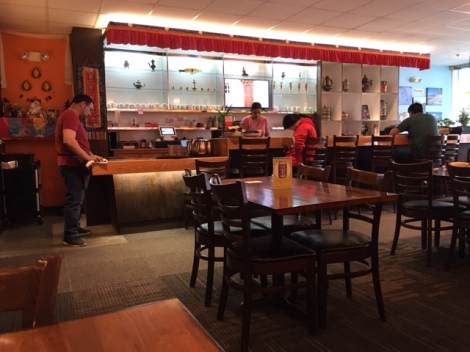 The owners of the restaurant, Pem Sherpa and his wife Moni Mulepati, hail from Nepal. Avid mountain climbers themselves, they took most of the pictures blown up into portraits adorning the walls of the restaurant.

Pem Sherpa has climbed Mt. Everest twice — first as a climbing sherpa and secondly in 2005  — which culminated in he and Moni getting married on the summit! (You can read more about that in articles displayed in the Himalayan Bazaar.)

The restaurant is located in the Oak Valley strip mall, but as you step inside, past the mountain climber prop welcoming you in the foyer, the restaurant is curtained off from the outside world and is instead something like a cozy enclosure where maps, trekking paraphernalia, and Tibetan chants take over the space. 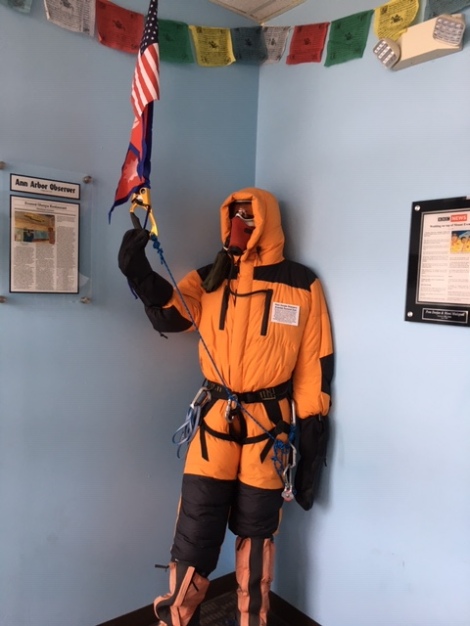 I was greeted immediately and had a nice warm, milky chai brought to me within minutes as I perused the menu.

One of the most popular dishes on their menu is the steamed momo.

Before they had a brick & mortar restaurant, the Sherpas started with a Momo food cart. I’d never heard of this bite-sized snack, but couldn’t resist. I ordered the chicken steamed momos. (You can also order vegetable momos, or have them fried instead of steamed.) The chicken dumplings were flavored with gingery Nepali spices and came with a dipping sauce (achar) of pureed sesame seed and tomato. I ordered a half-size. There was so much more I wanted to try!

These crunchy little bites of sliced onion and Himalayan spices were mixed in chickpea-flour batter then fried. They were served with homemade tamarind and mint sauce and I liberally dunked mine in both.

I was almost too full to try the Sherpa stew, but I couldn’t resist. I ordered the lamb version, but it also comes in a vegetable or chicken version. The broth is loaded with vegetables and dumplings. I’m sure it would be just the thing to warm up and fuel a mountain climber. For me, it went unfinished. I’d filled up on the momos and pakora and had no intention of tackling a mountain.

NOTE: During this COVID-19 health crisis, food is available through carryout. Please support this independent restaurant!

The Sherpas also own the Himalayan Bazaar on S. Main Street in Ann Arbor. Entranced with the decor of the restaurant, I eagerly stopped by the shop to get a new chakra flag to hang outside since the one I had blew away in a storm.

In addition to the flags (which I found right inside the shop, there are all the Nepali treasures you might expect to find: fair trade imports, incense, clothing, jewelry, shoes, statues, etc.. But there was also something I didn’t expect to find: sign-ups for expeditions to Nepal, Tibet and Bhutan!

Tours to Nepal, Tibet and Bhutan!

The Himalayan Bazaar on Main Street in Ann Arbor has a unique history.  The relationship between Pem Dorjee Sherpa and Heather O’Neal goes back to 1998 when Heather was trekking to Everest base camp in Nepal.  In the following years, they maintained communication even though Pem lived in a remote village at the time and spoke no English.  Having spent her junior year abroad in Nepal in 1986/87, Heather spoke some Nepali.  Soon after meeting Pem, Heather started a travel company, Of Global Interest Adventure Travel, in Ann Arbor.  She has been leading trips trekking in the Himalayas with Pem’s help since her first customer signed up in 2000.

I don’t know. Nepal just doesn’t seem like a place I ever expected to find myself. But I never thought I’d be living in such a foreign, fiction-like world right now, either. So maybe I do need to go to Nepal. I would like to eat some momos in Nepal and see where Moni and Pem started their steep “walk up the aisle.” After months of self-isolating at home, maybe a trip to faraway Nepal is just what I need!

Can you imagine yourself in Nepal?