I don’t know about you, but I LOVE pie. It’s the one dessert I can never resist. I love a good cherry pie, or apple pie, but sugar cream pie goes right up there as the best pie ever. Hoosiers think so, too; they deemed it their “Indiana State Pie” in 2009.

I discovered that Indiana Foodways’ has an online map showcasing 30 stops along a “Hoosier Pie Trail.” I mapped my route through Indiana using these stops as my guide.

My first stop was at Korners Kountry Kitchen in Brookville, Indiana. I arrived there at noon. They were all out of pie. 😦 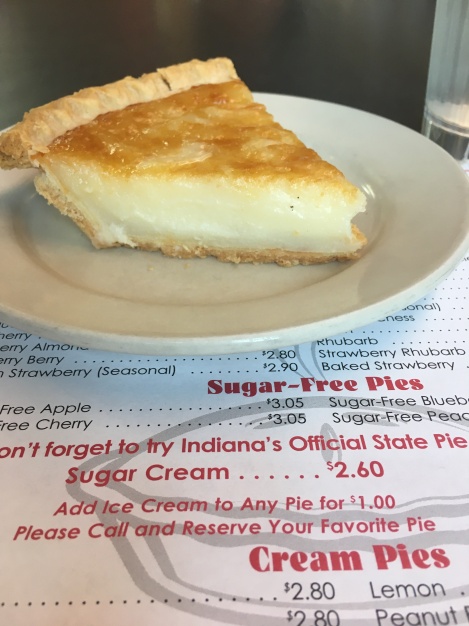 My second stop was at Mrs. Wick’s Pies in Winchester, Indiana. They bake 36 different kinds of pies each day, but sugar cream is by far their best-selling. We stopped in the restaurant on a Friday afternoon at 2:00pm and barely lucked out; the only pies they had left were a slice of pineapple pie, a slice of cherry pie, and a few slices of sugar cream pie. Wicks makes and sells 10,000 pies a day in their factory down the street from the restaurant. But if you want a slice, you’d better get to the restaurant early! I learned that the hard way.

Stops Along the Hoosier Pie Trail

We weren’t as lucky when we headed toward Next Door Neighbor Deli & Bakery in Middlebury; we drove up and down the road using their address but never did see a sign for a bakery there.

Instead, we headed a little further down the road to Das Dutchman Essenhaus. They had pies. Delicious pies! And a gift shop, bakery, restaurant, quilt barn, gardens, and much more. You could spend hours wandering around this place. We ate our pie and headed out to the Quilt Garden I mentioned in an earlier post.

You can find sugar cream pie in diners, cafes and restaurants all across the state. You can even find homemade sugar cream pies for sale at homemade pie stands like Pie Lady on 5. On the weekend, Carleen bakes sugar cream pies inside her home and then offers them roadside for pick-up. Sadly, I wasn’t close enough to her on my recent travels, but I’ll definitely head that way another time.

We made one more stop for sugar cream pie at Blue Gate Bakery in Shipshewana, Indiana. We spent the day browsing the Amish shops and enjoyed a slice of pie on the porch. It was as heavenly as the other pies we tasted. The Amish certainly know how to bake!

Hoosier Pie Trail completed (at least on this trip), we headed into Michigan. And there, in Crane’s Pie Pantry & Winery, I encountered a pie phenomenon that changed everything — a Pie Flight!

My friend Candice of Tours Around Michigan suggested we visit Crane’s in Fennville; about 20 minutes from Holland, Michigan. She said they had pie flights, and that’s all we needed to hear. We raced there just in time before they closed and immediately ordered this irresistible concoction.

Four mouth-watering kinds of pie served smushed into mason jars. It was pure genius! Crane’s should get an award for this mind-blowing alternative to choosing one piece of pie. I gobbled up one flavor after another: blueberry, cherry, apple, and rhubarb-raspberry. I can’t tell you which I liked best. It doesn’t even matter! That’s the beauty of the pie flight — you don’t have to settle on just one!

I thoroughly enjoyed the sugar cream pies I tasted on my way through Indiana to Michigan. To top those off with a pie flight was the proverbial icing on the cake. But you know what’s even better? Driving home through Indiana again and stopping at some of the places I missed on my first journey along the Hoosier Pie Trail. All roads lead to pie. 🙂

What’s your favorite kind of pie?

17 responses to “Where the Pie Trail Ends”