If you haven’t seen the film based on a short novella by Stephen King, rent it. If you’ve seen it and loved it, head to Mansfield.

Mansfield, Ohio is a small city in the middle of Ohio with a big claim to fame. It’s where most of the filming of The Shawshank Redemption occurred, and this August the town will celebrate the 20th anniversary of its success.

We were graciously invited by the Mansfield & Richland County Visitors Bureau to explore The Shawshank Trail. It began with a complimentary Shawshank package at the Quality Inn. I wondered if I should worry about a prison-movie package at a hotel, but curiosity got the best of me. What could a Shawshank package mean? A room behind bars with bread & water for breakfast? A rock hammer and a poster so that I could eventually work my way out? 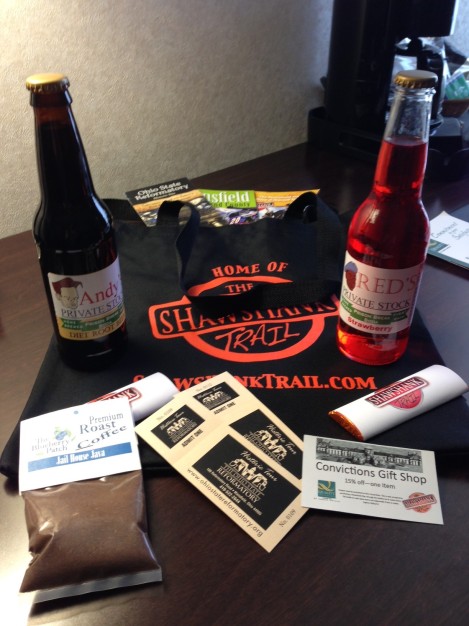 Not quite. We entered the room to find a bevy of goodies relating to the movie: two tickets for the Ohio Reformatory tour, chocolate “prison” bars from The Squirrel’s Den, Jail House Java from the Blueberry Patch, a Shawshank tote bag, Andy’s Diet Root Beer, Red’s Strawberry Soda and a driving map to explore the rest of the Shawshank movie sites around town.

Brooks Was Here. So Was Red.

Our first stop was The Squirrel’s Den, where we wanted to see the chocolate replica of Brooks’ apartment. (And where we discovered that we were following in Obama’s footsteps again.) Brooks, as you may recall, was the old man released from prison, who had trouble adjusting to life outside bars. 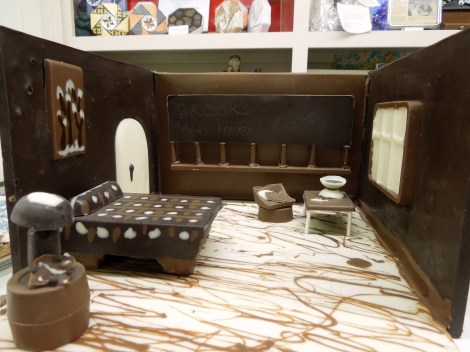 A block from there, we stopped at the park bench where Brooks sat and fed the pigeons, hoping his jailbird crow Jake would return. Then two blocks down, we saw the Bissman Building, which was used as the external façade of the apartment building Brooks moved to. 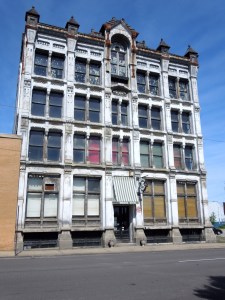 Later when we toured the prison (which I’ll feature in a separate post), we learned that the actual room featured in the film was a small room near the chapel inside the prison. Here we saw the famous “Brooks Was Here. So Was Red” etching in the wood.

Other Shawshank Sites:
You may recognize the background in this scene. This is the outside of the prison where Red and Andy often sat and talked in ‘the yard.’ It’s also the imposing stone wall that Andy first sees when he arrives in shackles at prison and enters the gate. 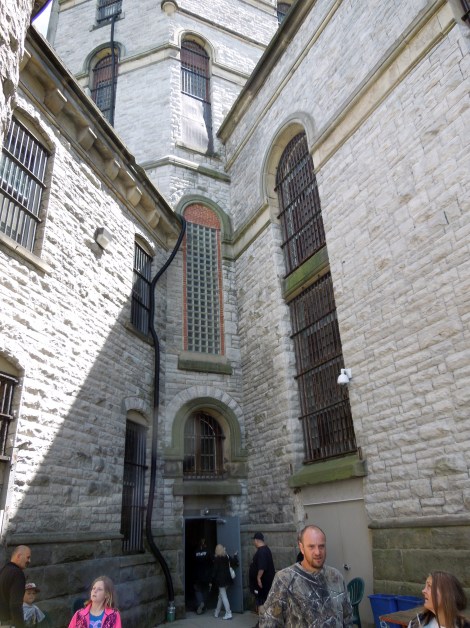 A few miles away, on private property across from Malabar Farm is the oak tree that Red goes searching for at the end of the movie. There is no stone wall, and the tree looks a little different now that a tornado took down half of it, but trust me. This is the tree. 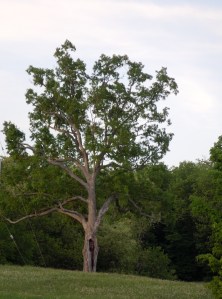 In addition, other Mansfield businesses have created Shawshank paraphernalia.
— The Ed Pickens Café has a Shawshankwich sandwich.
— Cypress Wine Cellars has bottled a Reformatory Red wine.
— Two Cousins Pizza offers a Redemption Pie.
— The Olivesburg General Store has a Shawshank Sundae, and is where you’ll find the original ceiling lights from the movie.
— Relax, It’s Just Coffee revs up with Shawshank coffee.
— Eatmor Bundt Cake has cooked up a Shawshank bundt cake
— And, of course, the Quality Inn & Suites Mansfield has put together a Shawshank Trail package, a Shawshank Reunion package, and offers Haunted Mansfield packages, too.

I don’t think I’ve ever seen a town embrace their Hollywood claim to fame in the way Mansfield has. But maybe it’s because few films are as legendary as this one.

I think The Shawshank Redemption is up there with the greatest movies of all time. Do you?

44 responses to “We Got Shawshanked!”