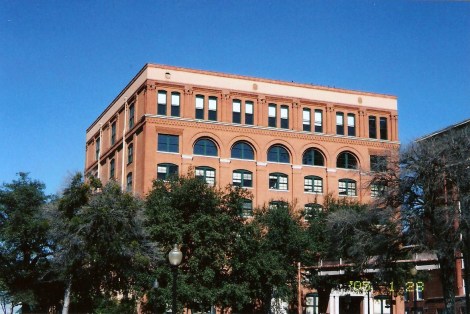 The former Book Depository, which houses the 6th Floor Museum

It’s been a long time since I read a Stephen King novel. But when my mother brought 11/22/63 along on a recent road trip and kept stealing moments to read a few more pages, I was intrigued enough to ask what it was about, and then hooked enough by her description to read it when she was done.

I’m not usually a time-traveler fan. Nor am I that interested in JFK’s assassination, since I wasn’t even born when it happened. Still, I found King’s storyline interesting: his protagonist wanted to travel back in time to stop Lee Harvey Oswald from shooting Kennedy. I immediately wondered why King chose this event as the most pivotal in history to change. I decided it was worth a read.

Again, I don’t read many books that include time-travel. It’s too much for me to figure out. Even as King started to explain the rules in his time-travel scheme, I was immediately besieged by questions: But what about…? and was thrilled that as soon as my doubting-Thomas skepticism flitted to the surface, King answered my question. Then another question would arise and I thought, But what about…? again, and King answered my unasked question again. I started to trust him and decided to sit back and enjoy the ride.

Stephen King answered every question I thought of. I started to think he could answer anything, and so my friends and I started posing the same question to each other any time we had a quandary. It became our tag line at work: WWSKD?

Little did I know that one author had basically asked just that. After I finished 11/22/63 (which I thoroughly enjoyed), I picked up another book to read: The Speed Queen by one of my favorite authors, Stewart O’Nan. It was totally coincidental that I opened it up and saw that he’d dedicated the book to Stephen King. The reason why immediately became clear.

O’Nan’s main character, Marjorie, was a convicted murderer sitting on Death Row, telling her story to Stephen King because he’d bought the rights to her life story. She had a list of questions she was required to answer as part of the deal, and she did — along with several writing tips and suggestions for King on how he should write her book. I thought that was so clever of O’Nan. It was a bit of humor in an otherwise dark novel. Marjorie had all sorts of writing advice for Stephen King.

Here’s a man who “knows what really happened” on 11/22/63. He was on Dealey Plaza selling the book he wrote about it.

As I wandered around Dealey Plaza in Dallas, I started to wonder what the conspiracy theorists who’d set up shop there would say to Stephen King. There were two of them there that day. Two people who feel compelled to share their own theories on something that happened 50 years ago. This was the second time I’ve been to Dallas, but there were conspiracy theorists there both times, ready to share “the truth” about what really happened on 11/22/63.

X marks the spot on the road where Kennedy suffered his fatal head injury.

I tried to get up my nerve to go ask them what they’d advise Stephen King to write instead, but couldn’t bring myself to subject myself to that. Instead, I hung on the edge of the crowds of other people they talked to, hearing things like “the government had given clearance before…” and “how could a bullet travel through the tree and hit Kennedy?” It sounded like they had a lot of ideas; none of which I wanted to be trapped into hearing.

So I thought to myself — WWSKD? And I knew the answer. He’d do his research and decide what he thought for himself. Then he’d turn it into a novel, exactly like he did.

Would you be curious enough to stop and listen to these conspiracy theorists?