As always, I did lots of research prior to my trip to Beijing, because this time I was combining business with pleasure. After my week-long training ended, my husband and daughter flew out and we planned to see all that Beijing had to offer. So imagine my surprise when we went to the Temple of Heaven and off in the distance I saw a gigantic ferris wheel that I hadn’t read anything about.

My daughter would love that! I thought. So we rushed back to the hotel to find out more about it, and that’s when our hopes were dashed. The ferris wheel was never completed. It just sat there, teasing us. It was like being at Disney World and never leaving the parking lot.

If we were looking at The Beijing Great Wheel, it would have been grand, indeed. At 208 meters tall (2008 with one 0 removed), it would have been taller than the London Eye and the Singapore Flyer. It was to have opened a week before the 2008 Beijing Olympics, but the developers went into bankruptcy and the wheel was never finished.

But though I found this information on the internet, I could not find any pictures of it other than models. Surely someone else has taken pictures of this gigantic ferris wheel. Instead I looked up amusement parks and found that there is one in Beijing that was being fined for using Disney characters without permission. They had a Sleeping Beauty castle that looks very similiar to Cinderella’s castle in Florida. Apparently, Hello Kitty, Dora and Bugs Bunny roam around the park without permission, too. 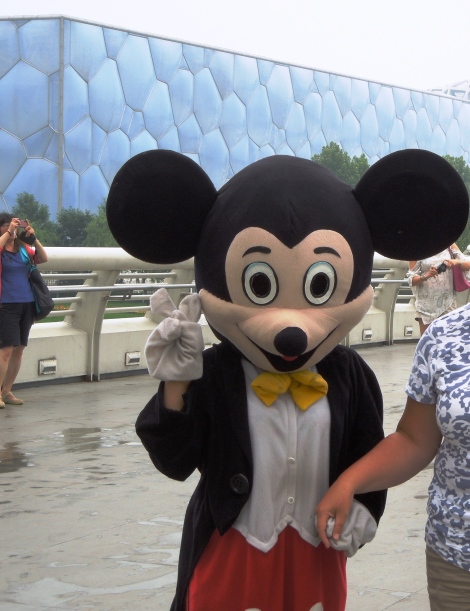 I’m pretty sure this character didn’t have permission to wear this costume, either. She was begging for money.

I can only assume that the ferris wheel I saw was part of this park, not the magnificent Great Wheel that was never finished. Or maybe it was all a mirage. Maybe no one else knows it exists because usually you can’t see through the smog.

Whichever it was, we didn’t take a spin on the wheel. We decided to save the Disney World thrills for Florida and spend our time in China seeing things can only be seen in China. Like the Olympic stadiums that were completed.

15 responses to “The Mystery of the Ferris Wheel”