A trip to Beijing basically demands an excursion to the Great Wall. There are dozens of tour companies to choose from, and most focus on day visits to one of the two most popular sections: Mutianyu and Badaling. So, how do you know which to choose?

Choosing a Tour of the Great Wall

Most tour itineraries are roughly the same: For $20-$45, you’re picked up at your downtown city hotel. Then you’re taken to the Ming Tombs. If you choose the Mutianyu tour, the tour companies usually stop at the Dingling tomb, which is the excavated tomb that requires walking down stairs into the underground tomb.

Frankly, the signs were the most interesting part of the Ming Tombs to me.

Tours going to Badaling also stop at the Ming Tombs, but typically visit the Changling Tomb, which involves climbing up stairs for magnificent views of the distant mountains on clear days.

From there, you’re taken to the Jade Factory no matter which tour you take. Obviously, the tour companies get a kickback from this. The stop itself isn’t bad. Your hostess proudly tells you about the importance of jade in China and demonstrates how to tell real jade from fake. Then the sales force descends on you and you’re tailed throughout the showroom. It’s not quite the high-pressure sales approach that the silk factory involves, but they’re definitely ready to help you pick out some jade.

Jade sculpture on our Great Wall of China Tour

After that, both tours include lunch. Then, finally – The Great Wall of China!

Badaling is the best preserved and the most crowded section of the Wall. And by crowded, I mean CROWDED. The line for the cable car was long going up and down. Once you go up the cable car, you can walk up the very steep part of the wall, or descend slightly and wind around. But either way, there are crowds. 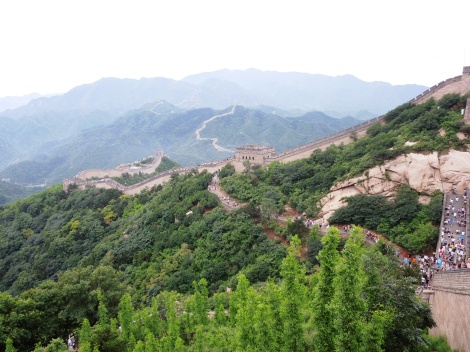 Here’s why I didn’t especially like the Badaling section: I’m afraid of steep inclines and want to hold onto the handrail. But with these crowds and people stopping to take pictures, or pull their children along, or catch their breath — it was difficult to get to the handrail and I desperately needed it. 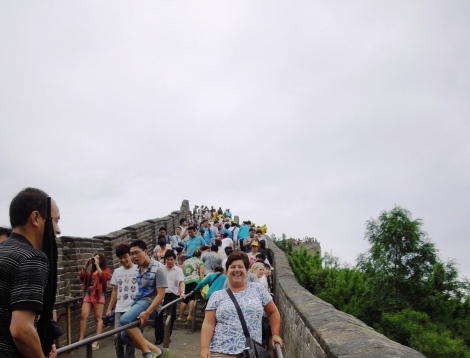 Crowds at the Badaling section of Great Wall of China

My husband and daughter went without me one day. (That should tell you something; I chose not to go to the Wall and endure the crowds there again.) Their tour company didn’t turn straight into the parking lot lined with tour buses and vans. Instead, they veered off to the right and went to a less populated area. They still took a cable car, but didn’t suffer the crowds. I should have gone!

I much prefer this section. It’s a little further out and both times I’ve gone, there has been either fog or haze. But somehow that adds to the allure for me. It’s easier to have space on the Wall to yourself at Mutianyu. My husband and daughter went ahead of me and conquered the very steep climb to the 23rd watch tower. I sat and waited for them to return and had the Wall all to myself for about 30 minutes! There are still very steep climbs like at Badaling, but I was always able to grab a handrail if I needed it.

Plus, I liked all the shopping you can do at the bottom. There are a lot more vendors at Mutianyu than Badaling, selling mostly the same stuff: Wall souvenirs, which is just want I wanted.

Souvenir stands at the Great Wall of China

There’s also the Juyongguan section which we saw from the bus as we passed on the way to Badaling. It was less crowded, and seemed to be a straight climb of stairs. It didn’t appeal to me as much, but some tour companies do go there. 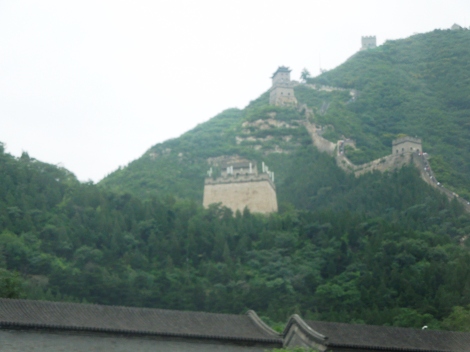 So which section should you visit while you’re in Beijing? Honestly, I’d try to see both. Both if you can only do one day there, I’d choose Mutianyu.

Have you been to the Great Wall? What do you think?

19 responses to “Mutianyu or Badaling– Which Section Should You Choose?”

The front bar of Ghost Baby is often overlooked, but has a beautiful speakeasy vibe all its own.