My name was Delia Mahon. I was a 20-year-old woman taking 3rd-class passage aboard the Titanic on April 11, 1912. I boarded at Queenstown (now Cobh), headed for New York.

This was the name on the ticket I was handed as I entered the Titanic Experience in Cobh, Ireland – the last port of call for the Titanic before it headed out on its fateful trip. It seemed fitting that I ended my trip to Ireland with a stop of Titanic proportions. The whole trip felt bigger than life.

Cobh is a beautiful little seaside town, with flowers and cafes dotting the hilly streets. 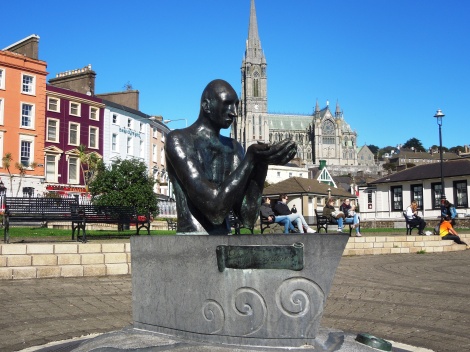 But for tourists, the main attraction is the White Star Line building that was the terminal for the Titanic. It was here that passengers lined up to tender out to the waiting ship beyond the cove. The original building still stands and now houses the Titanic Experience Museum.

Once you buy your ticket to the museum, you’re handed the card of a real-life passenger who boarded there (similar to the Holocaust Museum in Washington, D.C.). Once I saw that my person, Delia Mahon, was a 3rd-class passenger, I pretty much knew her fate.

A holographic image of a captain met us at the entrance and then took us through the reconstructed 1st class cabins of the Titanic. Father Browne, an amateur photographer, boarded the Titanic at Waterloo Station and took it as far as Cobh, where he disembarked. He took dozens of pictures while aboard that have since shown the world what the interior of the ship looked like. The Titanic Experience has recreated some of those interior rooms.

We followed the Captain through a 1st-class cabin and then we saw it — a video version of the ship hitting the iceberg, listing, then breaking in half before plunging into the icy waters. I’m not sure I blinked during the quick demise. I couldn’t stop picturing the scene in the Hollywood movie as I watched this more impersonal depiction. Celine Dion’s song kept playing in my mind. Leonardo DiCaprio and his ill-fated fellow passengers, Delia Mahon among them, screamed and sank in my mind. The museum video was not nearly as dramatic as the Hollywood version, but I superimposed the movie image in my mind.

After the sinking of the ship, we moved into another room where we could enter the name of our passenger into a computer and see our person’s fate. Sure enough, Delia Mahon drowned that night. I’d known it before I ever looked it up.

The Titanic waited for passengers to tender, just beyond the cove.

I left the museum and stared out at the sea, imagining the hope and fear that passengers felt as they left their families bound for America that day. And then I got a little spooked since I was leaving that day, too…

Of course, I did not suffer the fate that Delia did, but I was just as sad as I imagine she was to leave Ireland.

A few facts about the Titanic:
— The last survivor, Millvina Dean, died in 2009. She was a 3rd-class passenger.
— The cost of a 1st-class ticket today would equal $69,600.
— The Titanic’s three anchors weighed a combined 31 tons.
— The 700 third-class passengers shared two bathtubs among them.
— Popular belief holds that 2 dogs were rescued from the Titanic.
— Last message sent from Titanic: “We are sinking fast. Passengers being put into boats.”

Are you fascinated by the tragedy of the Titanic? I am.

20 responses to “I Was Delia Mahon”