Have you ever wondered where letters to Santa Claus go? I can tell you. They go to Indiana. Santa Claus, Indiana. And Santa writes back. 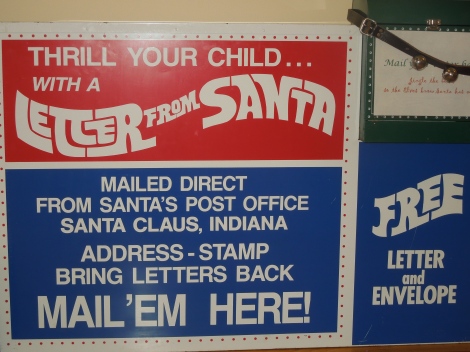 Each year the Santa Claus Museum & Village and a group of local volunteers called “Santa’s Elves” answer letters sent from children all around the world. They make sure each child receives a reply from Santa Claus; in 2012 over 14,000 letters were answered. As long as they have a return address on them, the good people of Santa Claus, Indiana do everything they can to answers these letters, continuing a tradition that goes back as far as 1914.

One volunteer, Lisa, told me that some letters make them laugh; others make them cry. But they answer every one. What makes them even more special is that they get a special postmark from the Santa Claus, Indiana post office. This makes me wish I’d sent Christmas packages from Santa Claus. Can you imagine the joy on a child’s face when a present arrives from here?

If you visit Santa Claus, you can have your child write a letter to Santa in the original post office that nows sits outside the Santa Claus Museum. Some of the letters other children have written are displayed inside the museum. One boy even admitted he’d been bad. Wonder what Santa wrote back to him?

Who would you send letters to from Santa Claus?