If you like reading books about the Holocaust, Corrie ten Boom’s tale of her family’s role in the Dutch Resistance should definitely be added to your reading list. The Hiding Place is one of my favorites. I liked that Corrie began her story years before Germany occupied Holland. It drove home the fact that things changed gradually, and without warning. The book captured the growing fear among everyone, and the subtle changes in lifestyle that finally resulted in the realization that this was war and nothing would ever be the same again.

If you’re not familiar with the ten Booms story, they were Dutch Christians living in Haarlem, Holland. A Jewish family came to them seeking refuge and they took them in. At the time, everyone received ration cards for food and Corrie bravely asked a family friend who worked in the ration card office for 100 cards. He gave them to her, and the ten Booms began taking in more and more Jewish refugees. The family built a secret hiding place (a beje) behind a wall that measured roughly 30″ deep. On February 28, 1944, Nazis raided the ten Boom house and searched for the Jews they were sure the ten Booms hid there. At the time, 6 people were hidden in the cramped hiding place and remained there for 47 hours.

I won’t give away any more of the story. Read it for yourselves. I will say that I found the smaller details about day-to-day life fascinating: the radio broadcasts, riding bikes without tires, ration cards and curfews. Hiding the Jews and the amount of clever planning it took: removing all traces that other people had just been dining, or had left trash, or belongings behind. The minute details that had to be attended to were incredible. As were the codes they used on the illicit telephone, the messages passed through the underground and the signal in the window.

Even more incredible to me was that an entire community kept this secret. I was amazed that all of the ten Booms’ neighbors knew what was going on at the Beje and yet no one turned them in.

Is it any wonder that I had to see this place for myself? 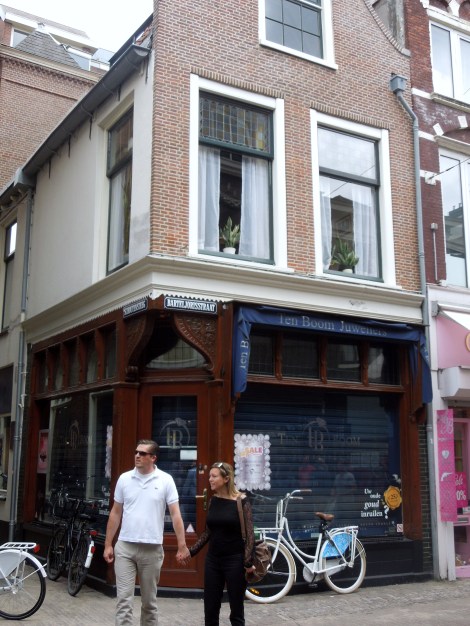 The Corrie ten Boom House is now a museum in Haarlem. They offer free guided tours to a limited number of visitors a few times a day. I got there just as the last tour of the day was about to begin and joined the 30 or so people standing in line in the alley. Though our group was very large, the tour guide mercifully let us all in. I was relieved since I was only going to be in Haarlem for the day. She gathered us in the ten Booms’ living room and told us about the family in what turned out to be a much more Christian-based lecture than I’d expected. 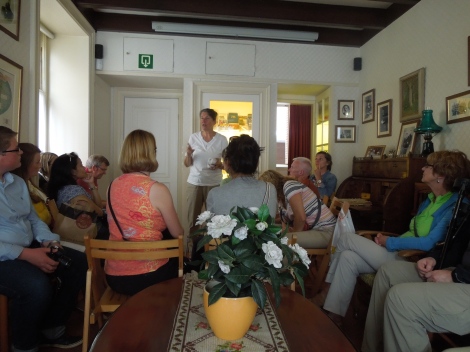 At times, the tour seemed to be more of a sermon than a tour, but it did drive home that the ten Booms were a very devout family who acted upon their Christian faith. In fact, when Corrie’s father, Caspar, was asked if he knew he could die for helping Jews, he replied, “It would be an honor to give my life for God’s ancient people.”

But I wasn’t there for a sermon. I wanted to see the hiding place. I imagine, so do you.

This is the hole that’s been busted through the wall so that we can peer into the small hiding place. You can see that it’s not very deep. 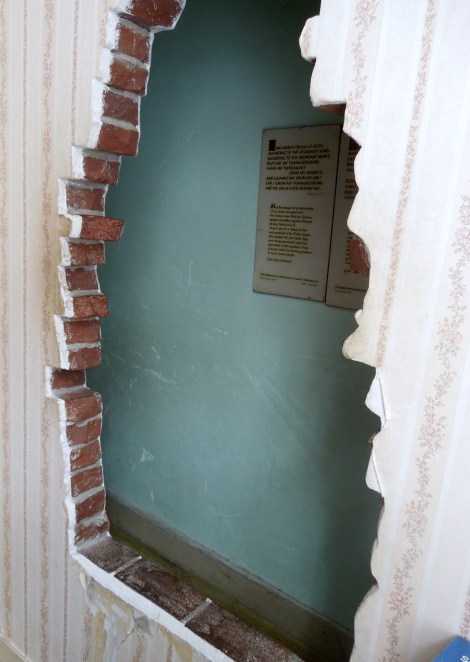 And this is the linen closet with a sliding door in the bottom shelf. This is what the refugees crawled through to get to the hiding place behind the wall.

I think this picture shows some perspective about how small the bedroom and hiding place were.

When I read The Hiding Place, I felt like I was a better person for the experience of it. Visiting the ten Boom house in person made me feel the same way. I stared out their windows at the bustling street below and the houses surrounding and tried to imagine what courage it must have taken to stand up against the German Occupation. I could picture the story so clearly.

I’m dying to tell you how the story turned out. But I won’t. Read the book, or better yet — read it and visit the museum.

Are you familiar with the ten Booms’ story?

13 responses to “The Hiding Place in Haarlem”