Here’s my suggestion for you if you find yourself in Vegas and you hit the jackpot: don’t spend your winnings on the jewelry stores that flank the casinos. Go make a call and reserve a helicopter ride along the Las Vegas Strip, Hoover Dam and Grand Canyon. The jewelry can wait. 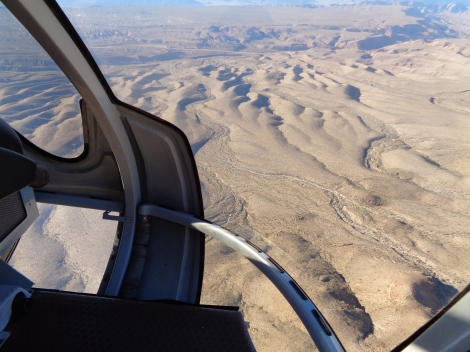 I was treated to a helicopter ride by Grand Canyon Helicopter Tours and loved it from the very minute I stepped into the black stretch limousine that carried me to the airport. I mean, who wouldn’t?

After a short safety video, we boarded the helicopters and I found myself in the front seat next to Brandon, my pilot. He explained how to use the headsets and microphones and we set out across the desert, Lake Mead, Hoover Dam, and into the West Rim of the Grand Canyon. Along the way he pointed out things we might not have otherwise noticed: a swanky community outside of the city where a number of celebrities own houses. He showed us which parts of the land were owned by the Native Americans and then we landed at the small helipad they own where we stepped off of the helicopter to re-fuel. 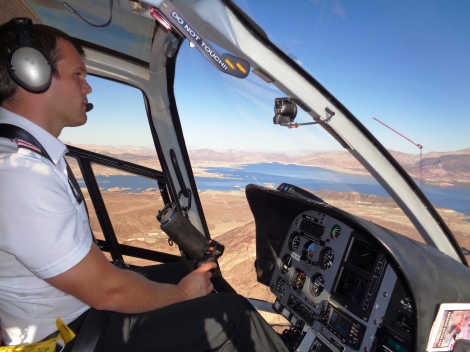 Once we re-boarded I mentioned to Brandon that I would be writing about the tour and we started talking about travel. He suggested other places in Vegas I should see (if only I had time!) and he pointed out things we could see from the helicopter that I might have otherwise missed: cattle grazing on Native land. The Nellis Air Force Base. A Wheel-of-Fortune painted into the desert floor near an old mine.

He suggested I visit Red Rock Canyon, which was a little too far out of his radius to travel, but flew over the red rock formations that he could: The Bull and The Valley of Fire. He said that the producers of “Total Recall” had thought to shoot parts of the movie in the Valley of Fire outside Las Vegas. My son would have loved it. 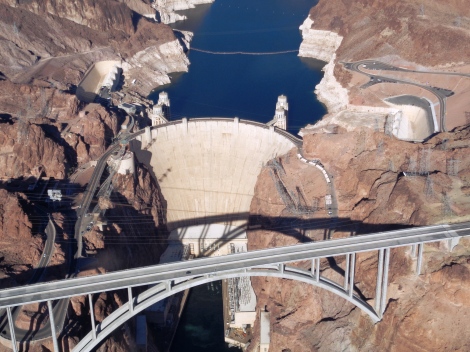 All in all, it was an incredible tour of natural wonders: the Grand Canyon, Lake Mead and the massive accomplishment that is Hoover Dam. We could see everything from the glass-sided C150 helicopter as it flew 150 mph across Nevada and into Arizona. This particular tour cost upwards of $389, but once you learned that the helicopter itself cost $3.2 million, you understand what a big deal it is to view the desert and Grand Canyon this way.

And who doesn’t love a bird’s eye view of the iconic Las Vegas Strip? 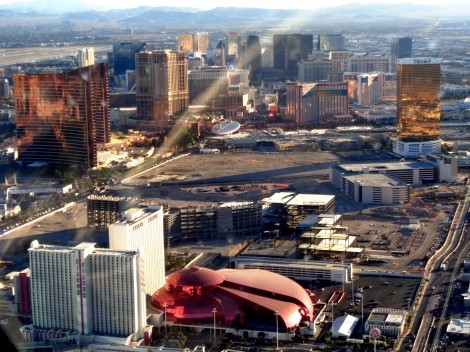 I want to thank Papillon Travel and Grand Canyon Helicopter Tours for arranging such a fantastic tour. I feel like I hit the jackpot!

If you hit it big in Las Vegas, what would you spend your winnings on?