The cloistered Poor Clare Nuns of Perpetual Adoration spend their days on the grounds behind this wall.

There were only a few cars in the massive parking lot of the Shrine of the Most Blessed Sacrament in Hanceville, Alabama on the Thursday afternoon of my visit there, but the bells began to ring at 3:00pm and  our guide Luke hurried us inside.

“If you like, you can hear the nuns doing their prayers behind the wall inside the church. You can’t see them, but you can listen.” 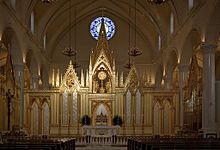 We quietly sat in polished pews and were blinded by the gleaming gold altar that rivaled many cathedrals I’ve seen in Europe. It didn’t have the history that those magnificent churches in Europe have, but it had something else: the pure, sweet voice of cloistered nuns chanting soft prayers in seclusion behind the showy gold wall.

As I listened to their voices, their devotion washed over me. They prayed like this five times a day, knowing  there were visitors to the church on the other side. Knowing that we must be so curious about them. Knowing that we were worldly and they’d secluded themselves, withdrawn from the world through papal enclosure, silence and solitude. We’d never see each other.

I wondered about them then. What must their lives be like, living on the grounds of a church, in a small spot on earth where they’d spend their lives before finally being laid to rest in the church’s crypt?

Then Luke took us to the door that the nuns enter when they commit themselves to this life. There were two saintly statues on either side of the double wooden door. When a young woman takes her vow to enter the monastery, she kneels there and prays, then knocks on the door. The Mother Superior then opens the door and invites her into the “Joys of the Lord.” The young novice rises and without turning back to her family behind her, she enters the cloister and the doors shut behind her.

I can only imagine it. As Luke described it, my mind sprinted to the moment when my son was sworn into the U.S. Air Force.  He raised his right hand, repeated his oath, and then was taken away by the USAF to leave for basic training. I imagined  the parents of these young women must feel like I did, watching their daughters walk through those doors into a life that they can never enter with her in much the same way I watched my son leave with his military unit.

Cloistered. I’d never considered before what that meant. Not only for those nuns called to that life, but for the families they left behind.

Are you as fascinated by nuns’ lives as I am?