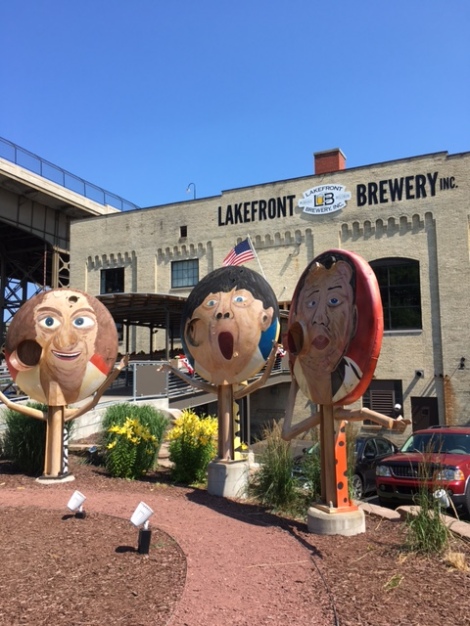 Walk into Lakefront Brewery and pay $10 for their tour. In exchange, you get a plastic cup, four tokens, a wristband, and a tour of the brewery. But what you’re really paying for is four cups of delicious brews and a lot of laughter as you walk past the brewing equipment.

Josh, our “Brewery Navigation Specialist,” had the group laughing right off the bat. I’m sure it had nothing to do with the fact that we all had full glasses of beer as we started, then raised our cups and cheered several times in the small tap area where Josh explained something along the lines of how beer is brewed. None of us were there to learn beer-making. We were there for fun, and beer, and Josh made sure that we got plenty of both. 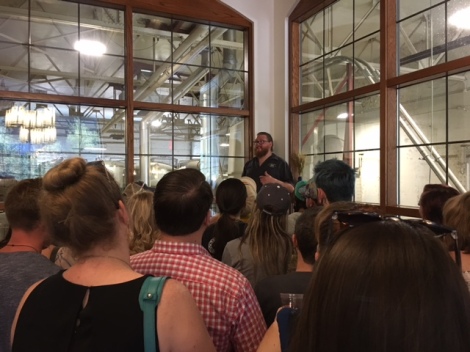 Before we left that room, he made sure we all had our glasses refilled before he took us downstairs to the vats and bottling machinery. We learned that Lakefront Brewery owner, brothers Russ and Jim Klisch, embraced Milwaukee’s rich beer heritage in many ways. They chose an old power plant for their brewery. They bought equipment from other prominent Milwaukee breweries, including the conveyor belt that is shown in the opening credits of Laverne & Shirley. You know the scene where Laverne puts her work glove over the mouth of a bottle as it glides past the two tired working girls? Well, that machine is at Lakefront Brewery now.

So, it was only logical that we all raised a glass to the picture of Laverne & Shirley tacked to the wall and sing the show’s theme song. 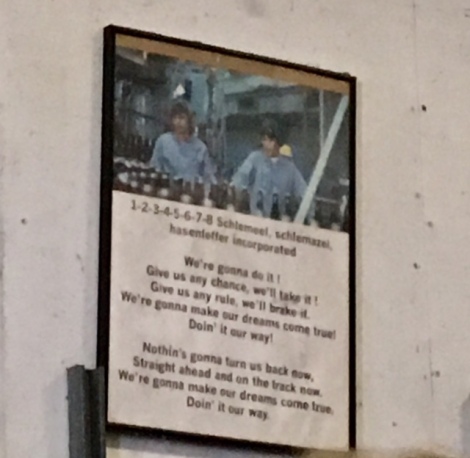 We did get to see a keg, a bung, and a mallet that Josh used to pretend that he was hitting a bung (a wooden disc) into the bunghole (the hole in the keg). It was all very funny as we stood in the basement of a brewery drinking beer with Josh.

We continued laughing all the way to the end, where we were given one more drink token and a chance to sit outside along the river enjoying our brew, or go back inside to the Beer Hall atmosphere. You know me — I did both. And I enjoyed the beers just as much as I enjoyed the tour. 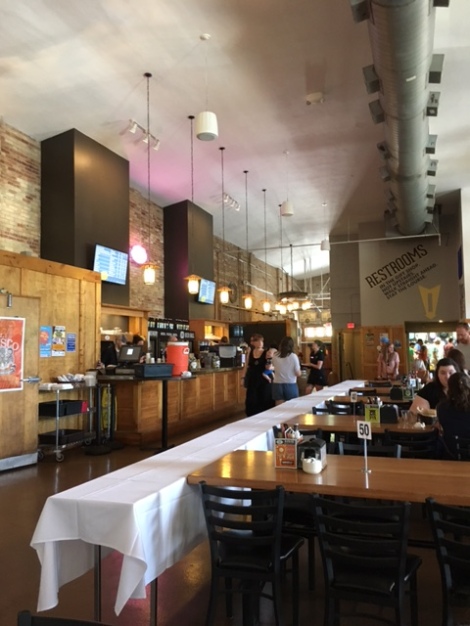 Out of curiosity, would you have been able to sing the Laverne & Shirley theme song?

24 responses to “Lakefront Brewery – A Laugh a Minute”