Being a travel blogger is fun. Period. Everyone who blogs about travel loves exploring the world and experiencing something new wherever we happen to go. TBEX (Travel Bloggers Exchange) knows that, too. They also know how to throw a party, and that’s what they did with gusto in Alabama. 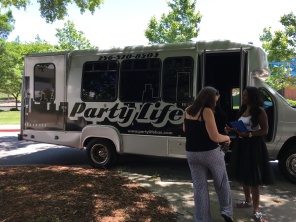 The Party Life is right! 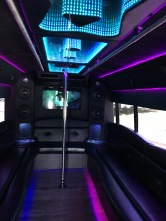 How many other people climb aboard a party bus in Huntsville at 1:00pm to travel to the Hudson Alpha Institute for FREE THE HOPS, a craft beer festival that supports local brewmeisters? We stood in the center of this scientific epicenter and filled our glasses with samples from microbrewers such as GreenBus Brewing, Wish You Were Beer, Salty Nut Brewery, and Straight to Ale, to name a few.

That’s how I spent my Wednesday afternoon. 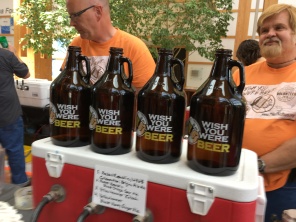 Love the names of these brewing companies!

Two nights later I found myself eating wienerschnitzel, red cabbage, sauerkraut, and potatoes at a banquet table set beneath the Saturn V. Not a replica — THE Saturn V. The replica was outside.

We’d tour past the rockets later, along with Space Camp. But first we enjoyed dinner and dancing with a live band playing Big Band music. This was all in honor of Wernher Von Braun, a German aerospace engineer who the V-2 rocket for Nazi Germany and the Saturn V for the United States. The movie October Sky is about him. 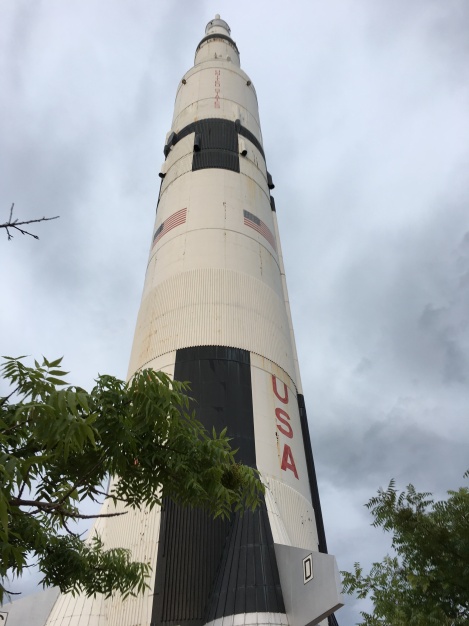 Replica of the Saturn V

After that fabulous party, there were others that I skipped because my days had been so full of sightseeing, learning and exploring, that the thought of a party wore me out.

But then there was the last night of my Alabama trip. I was in Montgomery for a three-day FAM (a.k.a. press) trip. We’d explored activities in the area that I didn’t even know existed. We’d met the Mayor, and chefs, and building project managers. We’d met museum staff and restaurateurs. We’d done A LOT. And sure, we were tired, but on the last night of the FAM trip, our Chamber guide sensed that we were all reluctant to see our whirlwind trip of Montgomery come to an end.

That day, we’d started with breakfast at Cahawba House where I had the most delicious beignets I’ve ever had in my life! I wanted to take a few dozen with me to-go, but remembered that I already had orange rolls from All Steak in my bags already.

Then we toured the Kress Building construction site. We donned hard hats and safety vests and followed the Project Manager through the renovations. It’s going to be amazing when it’s finished next year!

Then we visited Reverend King’s church where our tour guide, Wanda, shared her effervescent charm with all of us. We stood at King’s pulpit and each took a turn speaking King’s famous lines, “How long? Not long!”

Onto Chris’ Hot Dogs after that. They’d just celebrated their 100th anniversary and the current owner (great-grandson of Chris) came out to meet us and tell us stories of the famous people that had visited Chris’ Hot Dogs regularly over the years: George Wallace, Dr. Martin Luther King, Jr., Hank Williams, Tallulah Bankhead, etc., etc. Chris’ was the place where everyone was welcome: black, white or otherwise. In fact, it was one of the few places where Whites and Coloreds could enter through the same door.

After that, we raced through Montgomery’s new escape room experience. Then came a segway ride and a trip to EAT – an urban farm where some of the produce for the finer restaurants in Montgomery gets their ingredients. A nice farm-to-table movement on reclaimed land. The actors from the Shakespeare play we’d seen on our first afternoon came and enjoyed craft beers and hors d’oeuevres with us to round out the day with an afternoon mixer outside in a garden.

Then, finally — dinner. A fantastic dinner at Vintage Year in the upcoming  Cloverdale area. It was delicious. We followed that with a stop at Leroy’s bar, which is the neighborhood bar you’d find me at if I lived there.

Leroy’s finally closed and we boarded our van with the realization that our incredible tour of Montgomery and the rest of Alabama was coming to an end. It was a sobering thought. None of us were ready; we all wanted more Alabama! Sensing this, our Chamber guide veered onto a different road. Instead of heading straight to the hotel, she drove us past Zelda Fitzgerald’s house and then pulled into a cemetery.

She turned off the ignition and removed the keys. “Here we are,” she said. So we all piled out as we’d done at every other stop she’d carted us to. And there, before us, was Hank Williams grave. It was adorned with a guitar and offerings that people had left for Hank. We were thrilled! Midnight at Hank Williams’ grave. 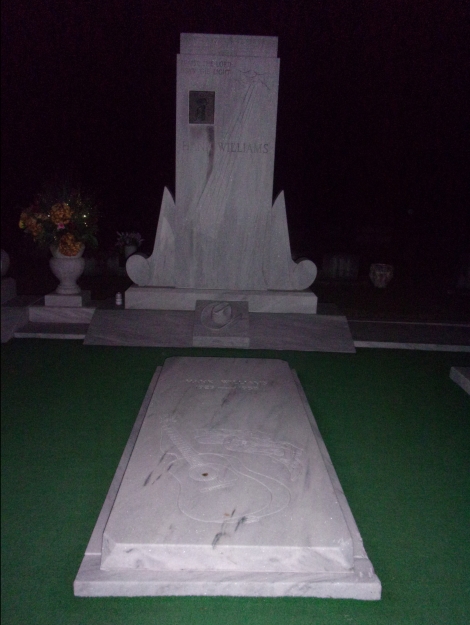 Someone pulled up a Hank Williams song on Spotify. We blared the volume and stood in a semi-circle around Hank & Audrey Williams’ gravestones, singing along in honor of Hank. It capped off the end of a once-in-a-lifetime trip.

That’s what it’s like to be a Travel Blogger. Parties and tours and unexpected detours through cemeteries at midnight. Just in case you ever wondered why we do it…  🙂

What kind of party would you love to experience?