Isn’t she beautiful? This woman sitting on a porch, fanning the smoke as she and two other women cooked pork skewers over a flame. They sat on a slab of cement next to the gravel road where motorbikes, bicycles, and pick-up trucks crunched past. I’m sure they’re there every morning. But I can’t imagine how many hundreds of mornings they’ve been there.

Yep. They’re practically on the road.

My tour guide, Lee, had scouted out places in the countryside that everyone in the villages frequented. Places that were considered the best among those who know; the people who live there. 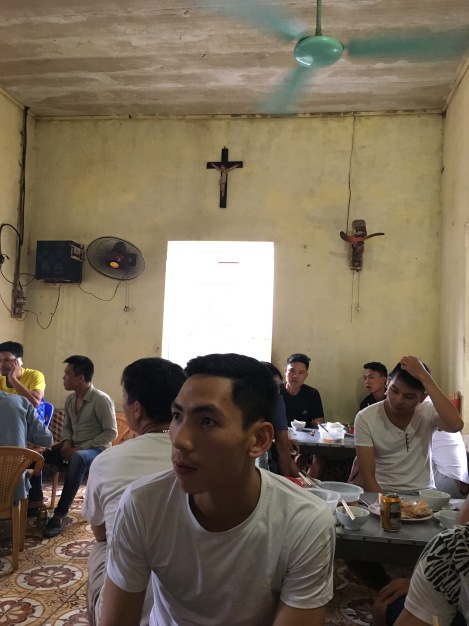 As soon as we arrived, we got stares from everyone inside. Surreptitious glances. It was very strange for two foreign women and an English-speaking Vietnamese man to pull up in minivan outside their restaurant. Everyone knew we had arrived. We felt like minor celebrities for the day.

One man came up to me and stood as close as he could. He was taking a selfie with me. Which was fine. I’d experienced that a lot at the Great Wall in China; people who aren’t used to seeing foreigners.

Meanwhile, the women cooking glanced over at us, too, but subtlely. Curious, but with too much work to do to wonder too much.

See the chopstick holder on the wall?

We went inside and Lee cleared a space at a table for us. He began assembling bowls of sugar water, vinegar, very thin slices of a hot red chile pepper, and thinly-sliced apples. We let that steep while our dishes were prepared.

Lee grabbed some chopsticks out of the basket on the wall, wiped them off, and handed them to us. A plate with 8-10 skewers of beautifully-grilled pork were set before us. Lee showed us how to slide the pork down the skewers into our bowls with the chopsticks. We mixed it up in the apple/chile mixture and then picked up pieces of flavorful, sweet, barbecued, grilled pork with our chopsticks. Lee kept putting more and more pork into our bowls and we started to fill up.

And then a three-generation family of women showed up, in dresses and pearls, sitting on the bench across from us, watching us eat. They studied everything we did and then  began asking questions to Lee, who translated for us.

“She thinks you must be the same age,” he said. She looked directly at me. I nodded, though I thought she must be younger than me, actually. But we were the same age, and she was there with her daughters and granddaughter. She wanted to know how many children and grandchildren I had. I answered her and she continued to talk with Lee about us as more and more people came with smartphones and snapped pictures of us. Which was only fair. Debbie, a British travel blogger/photographer on the tour with me, and I were snapping pictures of all of them, too.

It was the epitome of Vietnam to me. Friendly, curious, welcoming people who started conversations and offered information about their country, their food, their knowledge and culture. I think the Vietnamese were the friendliest people I’ve met on this planet. Everywhere I went, and everyone I encountered. So friendly.

Plates of rice pancakes arrived on our table. They were made a different way in this village than in others. These were considered the best. I’m no expert (since I’d never had them before), but I thought they were incredible! I’d watched the women make these pancakes outside with rice water and iron pots & pans and that had probably cooked hundreds of thousands of rice pancakes by now. Perfectly delicious every time, as only experience and intuition can create.

We stuffed ourselves with breakfast, and greeted other people as we left to move onto the next stop on our food tour. I hoped it was a long way from this place, because I was already stuffed!

But there was more to come…

Do these rice pancakes and pork skewers appeal to you?