It was raining this afternoon, and the temperature dropped. It seemed like the perfect time to spend a few hours with my daughter-in-law on a Rookwood Pottery Tour.

The tour began at Findlay Market, Ohio’s oldest continuously operated public market . Both the market and the factory are located in Over-the-Rhine, in a few slightly-sketchy blocks that are still undergoing transformation. Most of Over-the-Rhine is enjoying a revitalization and these two Cincinnati artisan staples embody the rich history to be found there.

As a Cincinnatian, the elite quality of Rookwood Pottery had been ingrained in us. People discover unrecognized Rookwood Pottery tiles or ceramics, fireplaces, or floors stamped with the RP insignia on the bottom. I had a Rookwood fireplace in an apartment I lived in during college in Clifton. It was green, and so pretty, though the fireplace was not functional. That was par for the course in these older, Victorian neighborhoods of Cincinnati. 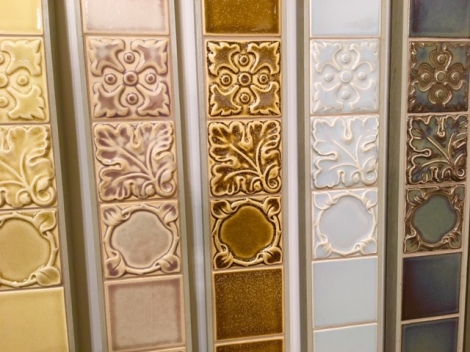 My Rookwood fireplace was not this ornate

But I never really knew the history and distinction of Rookwood Pottery until I took the tour.

Rookwood pottery was founded by Maria Longworth Nichols Storer in 1880. This marked Rookwood as the first company owned by a woman. Each piece is hand-painted and bears the signature marking on the bottom/backside of each piece.

The distinctive stamp of a Rookwood pottery piece

Rookwood also went so far as to develop its own “Standard Glaze,” a yellow-tinted, high-gloss clear glaze often used over leaf or flower motifs. That lead to the creation of two more distinct glazes by 1894 and then the company soon expanded into architectural pottery. If you explore Cincinnati, you’re likely to see some at the in Mt. Adams, in Carew Tower downtown, and at Union Terminal. You can also find Rookwood pottery in the Rathskeller Room at the Seelbach Hilton in Louisville, Kentucky, in the Vanderbilt Hotel, Grand Central Station, and Lord & Taylor in New York City,  and on display at the Carnegie West Branch of Cleveland Public Library. 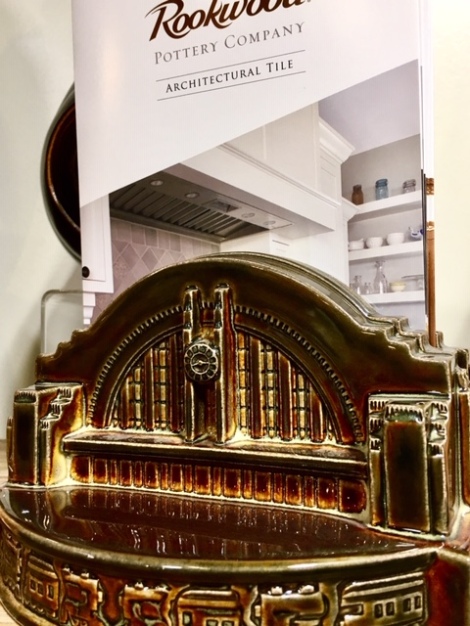 The factory keeps all of its molds on file, which serves restoration experts well. In 2012, the historic Monroe Building of Chicago completed a restoration and replacement of thousands of original Rookwood Pottery tiles. This was only possible because the original molds have been been preserved.

My daughter-in-law had never heard of Rookwood Pottery, though she loves decoration and art and has excellent taste and craftsmanship. I knew she’d appreciate getting a behind-the-scenes introduction to this iconic craftsmanship. She appreciates quality.

Rookwood Pottery tiles seems like a throwback to the glitz and glamour of more prosperous times, but it has made a revitalization these days as the Rookwood Pottery Company continues to craft iconic pieces. Most recently, they have created a Fiona Christmas ornament to commemorate Cincinnati’s favorite little premature hippo. That’s probably as much as this humble travel blogger can afford. But as Mastercard quipped, for me, owning a piece of Cincinnati’s artistic history — priceless.

Are you familiar with Rookwood Pottery?

14 responses to “Rookwood Pottery – A Piece of Cincinnati History”