Ponder this: a roomful of people have congregated to discuss the issue of slavery and whether the slaveholders in the southern states of the U.S. were civil and humane. Some never beat their slaves. Some considered their slaves “family.” But isn’t this all preposterous? Can you truly be “kind” to person you’ve bought like chattel and put to work on your property for the entirety of their life?

This is just one of the discussions that take place in the home of Harriet Beecher Stowe, one of the most influential abolitionists of her time and the author of Uncle Tom’s Cabin. Her home remains intact as a museum in its original location in the Walnut Hills neighborhood of Cincinnati where hundreds of slaves filtered through the Underground Railroad on their escape to freedom. 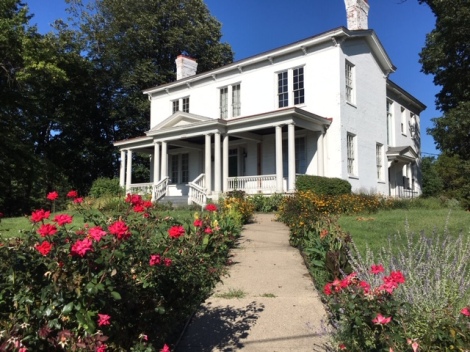 I was excited to learn about the various events that are held there and signed up to attend Visiting Uncle Tom’s Cabin: Harriet’s Research. I will admit right now that I have not read Uncle Tom’s Cabin yet, but hope that I will be inspired enough by all I learn about Harriet’s research to undertake this thick tome of historical fiction.

As pre-reading for the discussion, we were assigned materials that Harriet used in her work:

I diligently did my homework in preparation for the evening discussion in Harriet’s living room.

But before the group discussion, we were invited to tour Harriet’s house, which is open to the public during regular museum hours.

There wasn’t much to see, actually. The house belonged to Lyman Beecher (Harriet’s father), who was entrusted to build and facilitate a national institution that would combine manual labor with training for the western ministry. That became the Lane Theological Seminary. Lyman Beecher and his family moved there in 1832 and later, Harriet would meet her husband Calvin Stowe at the seminary.

The Stowe family took their belongings with them when they moved, but this furniture represents the home at the time.

While living there, Harriet became involved with the Semi Colon Club — a literary club in Cincinnati. This is where she began delving into creative writing and submitted an article to a magazine contest and won $50. Quite a prize at that time!

It was while she lived here, too, that Harriet visited Washington, Kentucky and witnessed a slave auction. That event haunted her. She watched children torn from their parents as the parents were sold. Harriet felt this trauma personally after she watched helpless as her young son Charlie died of cholera. Those two events later inspired her to write about enslaved families in Uncle Tom’s Cabin.

…I have been the mother of seven children, the most beautiful and most loved of whom lies buried near my Cincinnati residence. It was at his dying bed that I learned what a poor slave mother may feel when her child is torn away from her.” (From a letter, 1853)

Harriet didn’t write her bestselling novel until she’d moved to Maine with her husband and it was originally written as serial articles for a magazine. It began as a series of just a few articles but was so popular that it became a 40-week series and is often credited as “the novel that started the Civil War.”

It was the best-selling novel of the 19th century and was quickly bastardized into a number of plays all over the world called “Tom Shows.” It is even mentioned in Anna and the King and is a play-within-a-play in the movie The King & I when the children perform the story.

The Harriet Beecher Stowe House hosts several events every year including discussion events like the one I attended. Professor John Getz of nearby Xavier University put together a timeline of events, took us on a tour of the house, and helped lead the discussion.

Roughly 40 people attended the evening for a lively discussion about the slave narratives, now better known as freedom narratives, that helped shape some of the stories within Harriet’s work. We talked about the movements occurring in Cincinnati at the time and I once again found myself stunned to learn what a pivotal role Cincinnati played in the abolitionist movement.

Take, for instance, the Lane Rebels.

Theodore Weld (who later married Angelina Grimke, one of the abolitionist and women’s rights advocates featured in Sue Monk Kidd’s novel The Invention of Wings) lead a group dubbed the “Lane Rebels” in a controversial 18-day debate on colonization (sending all the black citizens to Africa) vs. abolition (outlawing slavery). The dissent among the group lead to a mass exodus of students from Lane Theological Seminary in 1834. Two years later, riots broke out in Cincinnati when white mobs attacked black residents who they felt were taking jobs that the growing white population should have.

I could go on and on. We had a lively discussion of other slave accounts and abolitionist records. It was a fascinating evening of Cincinnatians gathered together to learn more about this often-overlooked facet of our city’s history.

A visit to the Harriet Beecher Stowe House inspired me to learn more, and I know many school groups visit this quiet spot in Cincinnati. But if you can, I highly encourage you to attend one of the events held there, especially if you love history.

And if you haven’t read Uncle Tom’s Cabin yet, you’re going to want to. I made a pit-stop at the library on my way home!

How familiar are you with the novel and the abolitionist movement as a whole?

9 responses to “Talk at the Harriet Beecher Stowe House”

Have you ever been served a pizza with a pair of scissors to cut it yourself?