Try to imagine living in a time when you’d arrive by horse & carriage to this magnificent palace. You’re there to see the Duke of Courland. Or the Duchess. Perhaps you’re there for tea, or for a waltz in the ballroom. One of the first rooms you may enter is the Golden Hall, filled with gold and marble. It’s similarity to the French Versailles has lead this manor to be dubbed “The Baltic Versailles.”

Taking a tour with three guides dressed in period costume as they lead you through  sitting rooms, parlors, staterooms, and the private chambers of royal family gives you a sneak peak into Victorian grandeur.

The palace was originally built in the 15th century, but was completely torn down in 1772.  It was rebuilt using the stones, bricks and mortar of the original manor but was demolished in 1812 during the Franco-Russian War. Then in the 1880’s, the palace was restored, only to be destroyed again in 1919.

Finally, in 1938, the building was given to the State Historical Museum and has since been returned to its earlier state. Restoration of the palace was completed in 2014 and the rooms are absolutely stunning.

The white ballroom provides a stunning backdrop to emphasize the colorful dresses and jewels the women wore to events at the palace. As I watched our guides demonstrate a traditional Latvian dance, I agreed that the ornamental white decor made it all the more magical to be there. 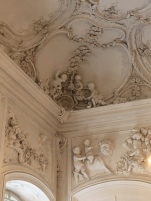 I liked the human moment of watching two people dressed for the occasion, indulging in a few moments of the gaiety of the time. It made it easier to imagine the Duke and Duchess as real people surrounded by guests delighted to be there.

Pomp and circumstance aside, the heavily-costumed guests to the palace were just people. Their dress and strict decorum make them seem two-dimensional, but as we wandered into the billiard room, we got a much more scandalous version of the people at the party.  They were making suggestive moves toward each other; moves that we wouldn’t recognize in society today, but boy — moves I would have watched for if I’d been a guest at the palace back then!

We were each given a fan fashionable to carry at the time and then — we were taught how to use them!

Use them? Was there more to it than just simply opening them and fanning our faces with a flick of the wrist?

Oh, yes. There was more. So much more. As soon as we all had our fans, we gathered around our two knowledgeable hostesses and learned the coquettish language of those ornamental fans.

Oh, how I’d love to go back in time and try my hand at subtly flirting with fans! I would love to be a fly on the walls of those long ago rooms, watching sly signals flying between lovers, easily intercepted by anyone who had their eyes open for such behavior. How I’d love to whisper secrets to my allies behind our pretty feminine fans.

The Secret Language of Fans

What are the fans saying? So much!

Oh, can’t we bring these Victorian customs back into practice? Can you just imagine?

Rundale Palace is filled with stories of marriages and annulments, children born, fortunes made and lost, and the politics of a country often at odds with the battle for its control. Fascinating stuff, for sure.

But if I were alive in that time, my interests would have remained inside the palace; not concerned with worldly politics, but over-consumed, I’m sure, with the domestic politics of the people surrounding me. A lot more fun, if you (furtively) ask me. Even more fun if you know how I respond.

So many secrets inside Rundale Manor

*A huge thank you to Magnetic Latvia for this fantastic tour. All opinions are mine.

Wouldn’t you love to spy on the secret language of fans for an evening?

16 responses to “The Secret Language of Fans – Inside Rundale Palace”