As you begin walking toward the Hill of Crosses just outside the town of Šiauliai, Lithuania, you are awed by the magnificent display of crosses on what seems to be a random hill in the countryside. There is nothing else around. There seems to be no reason for this hill to be “the hill” where people have left crosses for centuries. The randomness of it draws you in.

You stop and try to take a picture. It’s a semi-circle. You need to take a panorama. 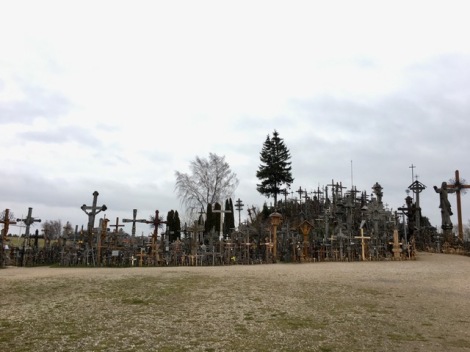 But then you step up to it and see that the crosses are hundreds thick. They have collapsed on each other. There are mounds of crosses atop crosses. Big, small, wooden, metal. Stone, engraved, handcrafted, broken. 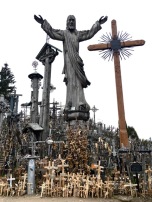 You realize there is no possible way to capture this in pictures. 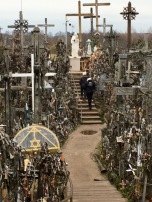 But you keep trying. 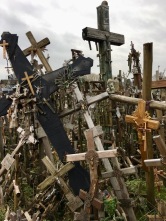 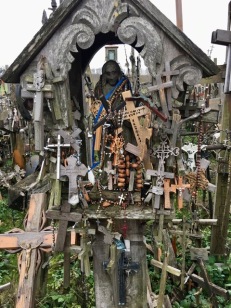 Origin of the Hill of Crosses in Šiauliai

So, why there? It’s an interesting unknown, though its protection as a sight for displays of religious worship and devotion as well as an act of defiance, is as mysterious and intriguing as wondering how it all began.

There are records dating back to 1850 that describe this Hill of Crosses, though it most likely existed before that. One story says that Lithuanian people who were not allowed to bury their dead according to Soviet rule, began leaving crosses here. There are also stories of Marian visions that prompted people to come to this hill and leave crosses. Pope John Paul II visited the site in 1993 and called it a place for hope, peace, love and sacrifice.

Whatever the origin, the site itself has endured persecution again and again, but worshippers rebuild after each destruction. The site has been bulldozed, burned, and destroyed more than four times since 1961. And yet, there are hundreds of thousands of crosses erected there.

Visiting the Hill of Crosses

The day we went was cold and very windy. The wind whipped through and we hunched into our jackets while we tried to take in the incredible number of crosses we saw we each step we took in any direction.

Paths through the Hill of Crosses

You could get lost in the trails of never-ending crosses. It reminded me of the catacombs of Paris in the way that you walk along the rows of skulls in Paris / rows of crosses on one small hill in Lithuania, and think there can’t possibly be ANY MORE. And then there are. 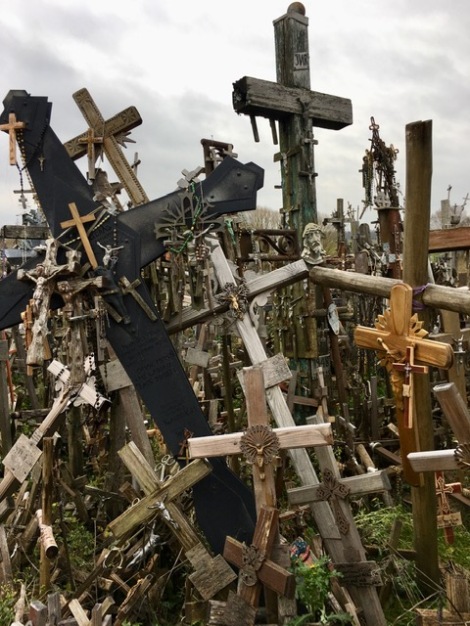 Crosses stacked on top of each other

You can see the Hill of Crosses anytime by pulling to the side of the road. There hill is not lit, so when it’s dark, visibility would be severely limited.

We chose to pull into the pay parking lot by the Visitor Center. There’s a display that explains a little of the Hill of Crosses and there’s a gift shop. Oddly, there were not crosses to buy and add to the hill. There were mounted crucifixes, and perhaps some people have thought to leave one of those.

My daughter-in-law had whittled a small cross to leave there. She tucked it into a tree. She’d done her research before our trip and learned that cross-making is a part of Lithuania’s cultural heritage. She’d come more prepared than I had. Her tiny cross was added to the mass of offerings on that Hill.

Handmade cross for Hill of Crosses

I was completely awed by the evidence of all the thousands of people who have come here and erected cast iron crosses, granite headstones, marble, stone, and metal crosses carved with pictures and words. The Hill of Crosses has traversed time, politics, and religious persecution. No matter who has come and tried to destroy this devout display of freedom to worship, the Hill of Crosses remains.

Have you experienced this place, or another like it?

12 responses to “The Hill of Crosses”

It is so peaceful having sheep come and graze in my yard. Free food for them, lawn care for me, and so serene. They’re just here for a week. My neighbors love it. 😊