The Catacombs of Paris

My third trip down into the tunnels of the Catacombs of Paris was no less macabre than my first visit. Seeing the stacked skulls and femurs of 6 million skeletons is always jaw-dropping. But since this was my third time, I did experience it a little differently.

Stacked skulls in the Catacombs of Paris

The first thing I noticed after waiting in line for over an hour (as usual) is that as soon as people enter the tunnels where the remains begin, they stop in a cluster and start to take pictures of the first group of skulls. It clogged up traffic and I chuckled to myself – you ain’t seen nothin’ yet. My friend took the obligatory pictures, too, and I said, “Just wait. Within 5 minutes you’re going to start being desensitized to it and walk right past them.”

Five minutes later, she did.

Walking through miles of tunnels of stacked skulls and femurs starts to seem surreal. First of all, where are the rest of the bones? I assume they’re thrown into all the tunnels that visitors don’t have access to because the catacombs stretches for many more miles than visitors are allowed to tour. 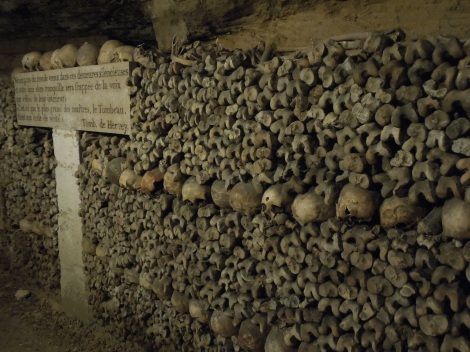 Everyone who enters the catacombs tries to capture the vastness of it on film, but it’s impossible. Even when I could get pictures of a long section of tunnel, it doesn’t complete the picture of how many tunnels like this there are and how many we’d already wandered through. 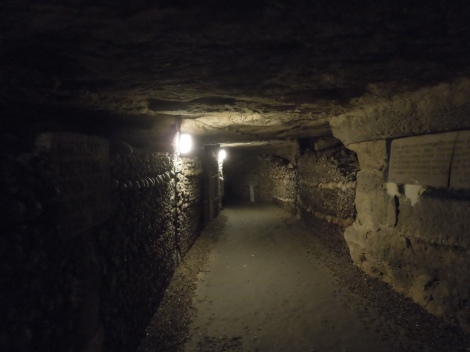 Or how many different artistic arrangements of skulls and bones there are.

Or how many bodies 6 million skeletons really amounts to.

Miles of tunnels of stacked bones

Why do the catacombs exist?

I learned that the French Resistance used these tunnels during WWII. Oddly enough, so did the Nazis — another odd connection to the loss of 6 million lives. But the remains buried in the catacombs are those that were moved from Les Innocents’ overcrowded cemetery because there was no room in Paris to bury all their dead.

Why they dismembered the skeletons is unclear (to me). The catacombs were regarded as sacred ground and not allowed to visitors for decades because it was sacrilegious to let people see the remains of these people. Yet, breaking them apart to create visually appealing stacks of bones seems to have been okay?

It’s hard to make sense of any of it. It’s now one of Paris’ 14 City museums. It’s a place I definitely recommend any visitor to Paris see. It’s unlike anything else I’ve seen in the world and is macabre no matter how many times you go.

Have you been there? Or is it a place you’d visit?

24 responses to ““The World’s Largest Graveyard” – Catacombs of Paris”