During my time in Riga, I was fortunate to experience The Latvian Element’s soft opening of their Food, Glorious Food Tour. Our guide, Darta, could not have been more charming. She graciously hosted 12 travel influencers through the Riga countryside to experience Latvian delicacies and homemade goodies that I’m sure none of us would have otherwise enjoyed.

Our first stop was in Carnikava at a small establishment seemingly in a backyard; the kind of place you’d never find on your own. A man came out to greet us. He showed us around the place — a kitchen, a brick oven area, an outdoor grill and picnic tables, and a dining area. There we heard the story of our host Eduarda Skaveņecu’s foray into processing lamprey following an acclaimed career in wrestling. We looked at pictures and medals of Skaveņecu in his wrestling heyday as Darta translated his story for us. He and his wife, a champion shooter who later went into physical therapy, were well-known figureheads in in the 1970’s sports world, but later turned to fishing and grilling eels once they moved to the countryside.

Eager to get away from the city after their extensive careers in sports, Eduarda and his wife turned to fishing as a way of life. He was happy to share the medals, ribbons and news stories of their former lives in sports, but that was after he pointed out the educational display of pictures explaining the step-by-step process of making lamprey. After all, we were there on a food tour and discovering our interest in how he’d come to work in the fish business had been a happy surprise. 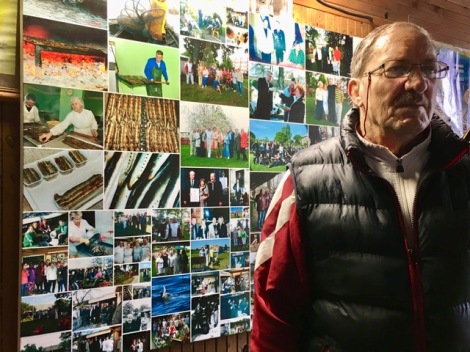 How to prepare lamprey eels

The group of us admired Eduarda’s displays, until our attention was drawn to a man behind a glass window, preparing a tray of eels. We all wanted to watch that. I don’t believe any of us had tried lamprey before, so we were curious to see what was in store. We huddled at the glass window, watching him haul in a bucket of eels. 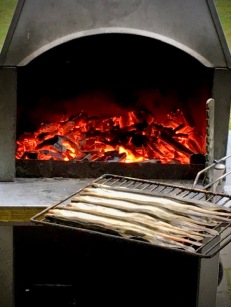 He deftly laid them in rows on a rack, then put the rack in the oven. As those began roasting, he began laying more eels on another rack. He was like a well-oiled machine. Interestingly, once the eels came out of the oven, they were transferred into a bucket of water for at least six hours.

In another section of the kitchen, two women were pressing the eels, collecting the jelly of the compressed eel and packaging the lamprey for sale.

I loved the fact that we got to experience this! The signs in this man’s backyard were only posted in Latvian, and there was little suggestion that there was a business here. It was someone’s backyard! But tucked away in the outbuildings was a whole lamprey operation going on; a very successful one, I might add. 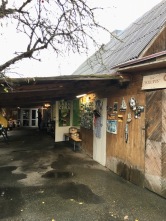 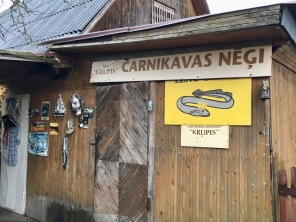 The eels are ready!

Once our lamprey was grilled again on a rack outside, the fish were plated with a small pile of salt and lemons to juice them. Then you are supposed to grab it by the head, holding it high above your head, and eating it from the tail up. That’s how you eat them. So that’s how we did. 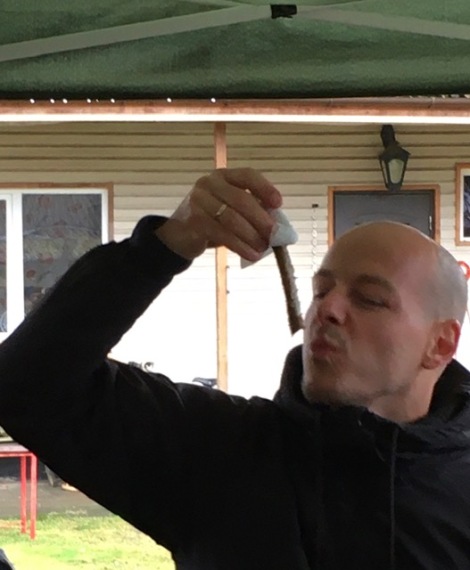 Hold the head and eat from the tail up.

They taste better than they look. Let’s face it: these blood-sucking, parasitic eels are not pretty.  They have teeth! This is not a dish I would normally seek out. But when I bit into it, I liked the crunchy grilled skin and the taste of the sea. The eel reminded me of calamari. Or maybe a pork chop. It had that kind of meatiness to it. I liked it — until the eel got thicker toward the head. That’s where I stopped. I think we all chose our cut-off point with the grilled eel and then moved inside to a small dining area and were treated to sushi made with the jellied eel. It had a very different flavor which worked well as sushi. So, I liked it both ways: grilled and whole, and as sushi with the jellied eel.

It was an unusual breakfast, but we were headed to another house in the countryside where a couple made and sold ice cream.

Janis Joma and his wife Eva also left their city jobs in Riga to try to make a living in the country. They came up with ice cream, which is made with fresh eggs from their chickens. The flavor pays homage to the traditional Jewish way of making ice cream with egg yolks. 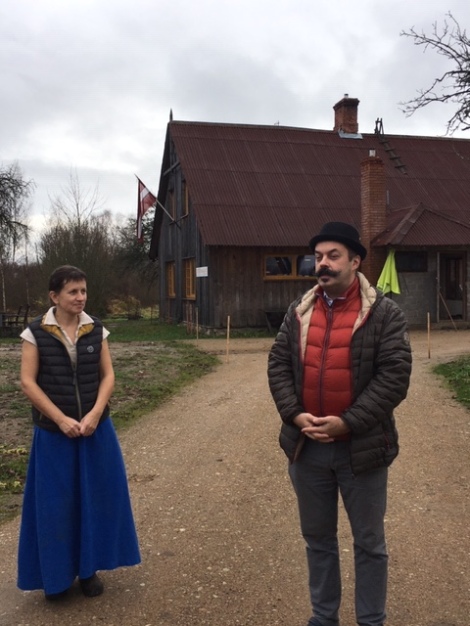 They began selling their ice cream at a farmer’s market and it became so popular that people sought them out. When they didn’t show up at the farmer’s market one day, people came in search of the ice cream. That gave them the idea to turn their summer home into a business and Gogelmogels was born.

When we visited, it was raining steadily so instead of eating our ice cream outside like most customers would, we were invited into their home and sat at their long kitchen table and were served bowls heaped with scoops of ice cream, and a piping hot cups of coffee.

Janis shared that he also worked as a musical actor, then sat down at his piano and pounded out some rousing songs while we spooned up the various flavors of Gogelmogels:  vanilla, sea buckthorn, stracciatella, bee pollen, and halvah. 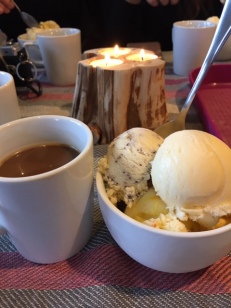 Before we left we took a peek into the chicken house to see the secret behind the distinctive flavor of Gogelmogels ice cream: the fresh egg yolks they produced. Janis and his wife tried using store-bought eggs once when they ran out of their own eggs, but the taste just wasn’t the same. Their hen house grew, so customers never need worry about that happening again!

Sigulda (a resort town as I mentioned in my post about bobsledding) was our next stop. There we took a walk around the grounds of Krimulda Manor. Sigulda has two castles but Krimulda Manor is often included as the third “castle” in this town. 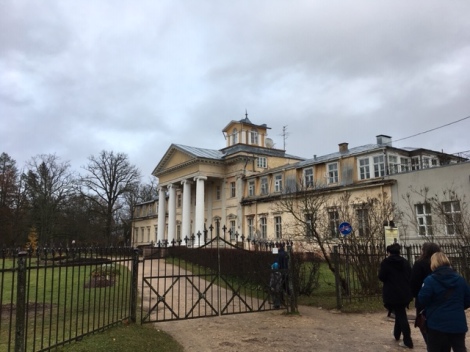 Grapes don’t grow in the Baltic region, so Latvian wines are a little different from the norm. Here they’re made from different plants; some familiar to me as recipes that my ancestry in the Appalachian Mountains of eastern US used. Our host, the manor’s winemaker Jānis Mikans, presented us with a dandelion wine to start.

When I was a kid, my dad used to tell me and my brother that if we’d go pick all the  dandelions in the yard, he’d make dandelion wine. Like fools (children), we did. Though honestly, what else did we have to do on hot summer days? I never minded picking the dandelions, but my dad never made that dandelion wine he talked about. I have, however, had dandelion jelly a few times. And dandelion greens in a salad. But this was the first time I actually got to try dandelion in wine form, and I loved it. It was my favorite of the three.

We also tried rhubarb wine and lilac wine. All of the wines made there come from the Latvian hillside. They use the berries and other plants of the region. I thought all three wines we tried were pleasant, but dandelion wine is what I bought to take home. 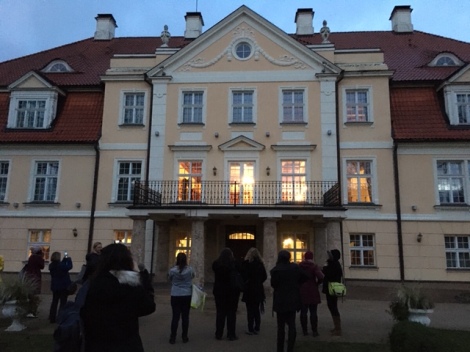 Dinner at the elegant Malpils Manor

The last stop on our Food, Glorious Food Tour was for an elegant dinner at Malpils Manor. As we were a group of women travelers, The Latvian Element had arranged to have the acclaimed female chef, Aija Gabrāne, come out to greet us.

Malpils Manor is listed as one of the Top Latvian Restaurants, and was recognized by Chef Jamie Oliver who called Latvia a hidden culinary gem. He was right!

We enjoyed a three-course dinner in an elegant dining room. We started with Jerusalem artichoke cream soup with vegetable crisps. DELICIOUS!

Our entrees were a choice of Cod fillet, vegetables and lentils in a cream sauce, Pork fillet, roast potatoes, vegetables and barley in a demi-glace sauce, or Quinoa risotto, vegetables, nuts, and fresh basil pesto.

Fantastic, seasonal entrees. It was hard to choose.

Then dessert: a meringue, cheese cream, with a coffee-cognac sauce.

Meringue dessert with a pinecone garnish

With our bellies full, we relaxed on the hour-long bus ride back into Riga. At first, we all chattered about all the food we’d had over the course of the day, and what we liked best. Then the bus grew quiet and we pulled up to our hotel. We thanked Darta for the sneak-peek of their upcoming Food, Glorious Food Tour. They’ll begin offering the tours this April.

As we thanked her, I thought about all the innovative entrepreneurs we’d met that day: Janis and Eva, Eduarda Skaveņecu, Janis of Cremon Winery, and Darta of The Latvian Element. Each one of their stories made the day more special. These were risk-takers who pursued life away from the city and found a way to have a second career that was more to their liking. I left inspired, thinking that I’d lucked out on taking such an incredible tour. This is what I love about travel: unexpected adventures and the chance to meet remarkable people that I never would have crossed paths with any other way.

*Special thanks to Magnetic Latvia, The Latvian Element and WITS for this complimentary tour. I loved it!

Which of these dishes intrigue you?