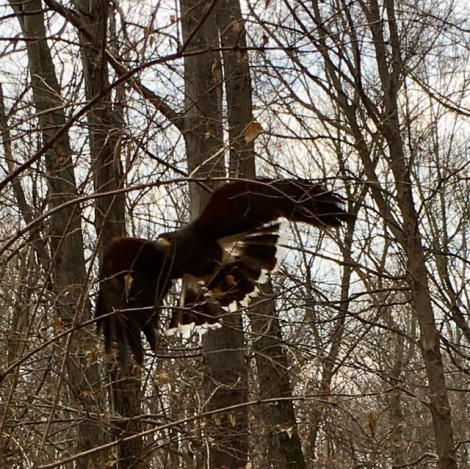 Two things lead me to contacting the Ohio School of Falconry: a special on 60 Minutes about Lauren McGough, one of the only woman falconers who hunts with a tribe in Mongolia, and the book H is for Hawk, the memoir of a woman who trains an irritable goshawk. Both stories made me curious about what draws a person to work with these magnificent birds of prey. I found my answers at the Ohio School of Falconry in Columbus, Ohio.

The Art of Falconry

Katie, a falconer who attends college nearby, started our morning “apprenticeship” by explaining some of the equipment involved. Naturally, one of the most important pieces of equipment is a thick leather glove to protect oneself from the crushing talons of these birds. The force of their talons can be as high as 400 pounds per square inch. Crushing their prey is how these birds kill, if not just immediately maim, their victims.

Look at those talons! I am holding the leather jess strap in my hand.

Another important piece of equipment are the soft leather jesses (straps) that are fitted onto a bird’s leg. These tethers are used during training. Some birds also wear bells on their leg. This helps the trainer find them once a raptor has caught its prey, since it may be quite a distance from where the bird was released, and may be hidden in brush or woods.

Katie also showed us little tiny hoods that looked like miniature football helmets in a way. These are designed to cover the bird’s eyes during transport. Raptors primarily rely on their eyesight to hunt; their vision is 10x as perceptible as a human’s, so in order to protect the birds from over-stimulation as they’re introduced to a new environment, sometimes it’s necessary to cover their eyes until they can acclimate to the new space. 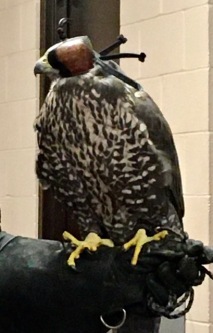 We got a quick introduction to the behavioral steps involved in setting out for a hunt. One consideration is the bird’s weight. Katie let us feel the keel of Henson, the owl we were going to interact with first. The keel is the angular chest bone of the bird where fat deposits gather. It’s important to maintain a raptor’s weight and keep the birds a little hungry before a hunt. The birds only return to the falconer for food. As Katie explained, the birds are trained using trust and food. Once a raptor trusts that his falconer will feed him, he will return to that falconer.

Raptors only eat meat, so while we took a Walk with Hawks, Katie put pieces of mice on our gloves to get Chase, the falcon flying with us, to return to our gloves. Katie was always nearby since the birds didn’t trust us — they trusted her. 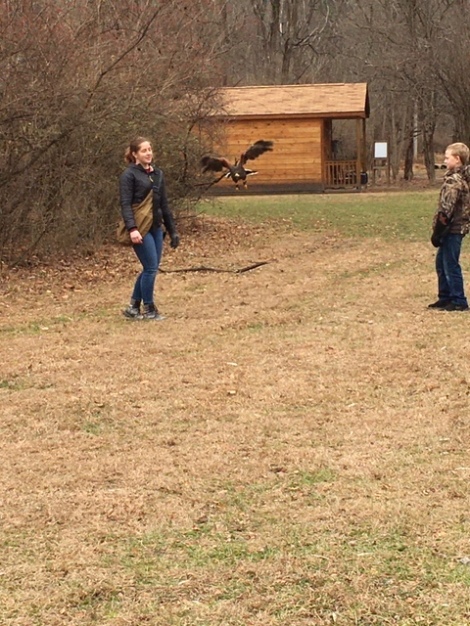 The raptors must trust their falconers if they’re to return.

It was a little unnerving to have a huge bird glide toward you with its impressive wingspan getting closer and closer. We were careful to keep our arms steady as the falcon landed on our gloves. Never in my life had I expected to hold a raptor on my arm, but it was exhilarating. To see these magnificent birds within arm’s length was a once-in-a-lifetime experience for me. I thought I’d be afraid, but I wasn’t at all. Instead, I was in awe.

We each took two or three turns, standing at the ready for Chase to fly to our glove and take her treat. Then, we threw her up to the sky to fly again. 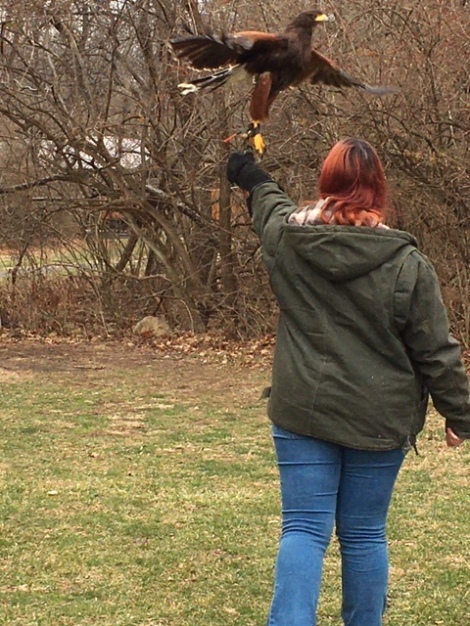 The raptor returns to the sky

The History of Falconry

Katie quizzed us on our knowledge of falconry and asked if we could guess where and when we know that falconry began. A few of us guessed Mongolia, since the 60 Minutes episode recently aired. Someone else guessed Egypt. But actually, the first recorded pictures of man using birds to hunt is in Japanese tapestries dating back 6,000 years.

Falconry was also recorded in detail by William Shakespeare. He was an avid falconer and it is through him that many falconry terms have become part of our daily vernacular:

There are at least 50 references to falconry in Shakespeare’s work. Just as there are critics who question whether Shakespeare did, indeed, write all the works he is credited with, some question whether he was writing about falconry from experience. I’m not sure why people are so overly concerned with discrediting him, but he was known to hunt with hawks and his writing certainly seems to express his admiration and passion for the sport.

Henson the Owl, so named for Jim Henson, creator of the Muppets

The Ohio School of Falconry was established in 2014 by Joe Dorrian, whose childhood dream was to learn falconry.

“I was 12 years old and I would walk around, and I would carry a leather glove and whistle just in case I ran into a falconer’s escaped bird,” Dorrian said.

He accomplished that and so much more by creating the only falconry school in the state; one of only a few in the nation. He now has a staff of falconers who eagerly teach the public about these fascinating birds. What makes the Ohio School of Falconry special is that you learn the Five Skills of the Falconer (the basic skills that falconers use every day when trapping, training, and hunting, with their birds) hands-on with the birds.  There are also team-building and educational programs available with the birds.

I’m sure I’ll never be the master falconer that Lauren McGough is, but I loved the chance to see what these majestic birds can do. I’m hoping to go along on a hunt with them sometime — not that I’m sure I can stomach watching them go in for a kill, but then again, it’s all a part of the natural life cycle, and watching these birds do their thing would be absolutely incredible.

*Special thanks to the Ohio School of Falconry for hosting us on their Walks with Hawks experience.

Have you ever thought of trying your hand (pun intended) at falconry?

23 responses to “A Bird in the Hand – Falconry”