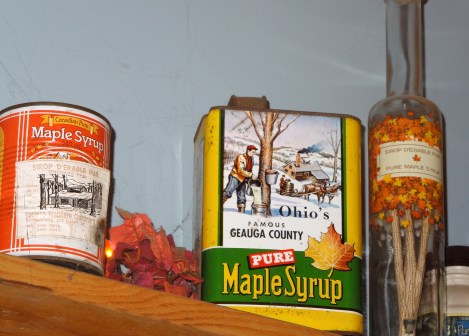 I grew up with maple trees in the yard but never realized that we live in the region that supplies maple syrup to the rest of the world. It is only around the Great Lakes and eastern Canada that maple syrup is made. Who knew?

The state of Ohio fully embraces its role in maple syrup production and hosts two Maple Sugaring weekends in northeastern Ohio each March. I was told beforehand that the ideal time to tap the trees would be on a day that reached about 40-45 degrees Fahrenheit following a freeze. This past weekend was just about perfect. Freezing nights and slightly warner temps during the day. I headed north to Geauga County for the Maple Madness Driving Tour where family-run maple producers open their maple-sugaring operations to the public. 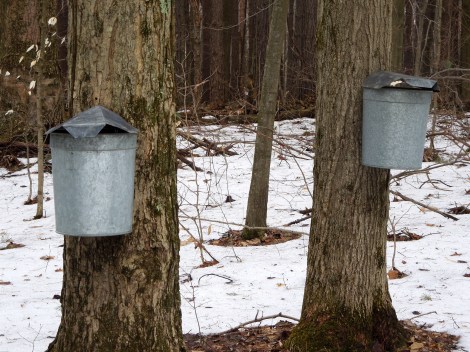 Some families still collect sap in pails in their sugarbush (grove of maple trees). Other harvesters are using plastic bags, or modern tubing systems that are linked together and carry the sap through the sugarbush, using gravity to spill the sap into the sugarhouse where the sap is boiled.

Consider this: it takes about 45 gallons of sap to make one gallon of maple syrup! When you look into the pool of sap, you can see why; it is as clear as water. In fact, it’s only 2% sugar and 98% water. The syrup producers use reverse osmosis and evaporation to boil it down to the sweet, sticky confection we know and love.

This is sap. It just looks like sugar water until it’s boiled down to the right consistency.

Much easier than the way the pioneers did it, by boiling kettles full of sap for days. The county parks shared the historical processes as part of the Maple Madness Tours.

The maple producers I visited said that the bitterly cold winter probably hurt syrup production this year, but the coming weeks will tell. Maple sugaring usually begins mid-February and ends in March, though they’ve experienced seasons that only lasted a few days and others that lasted up to nine weeks.

After I took a tractor out to one family’s elaborately-piped sugarbush and saw their reverse osmosis machine, I went to a place called Ma & Pa’s where we were given buckets and taken out to the sugarbush on a horse-drawn carriage. I happily carried a pail of watery sap from a tree to the evaporator. It was exciting to me to see such an abundance of sap from the tree I picked, and I couldn’t resist sticking my finger in to taste it. Not surprisingly, it tasted like mildly-sweetened water. Nothing like the small cup of maple syrup we later sampled in the sugarhouse.

I’m not going to lie; it didn’t taste as potent as the maple syrup I remember from Canada. Perhaps it was the result of this winter’s frigid season, or maybe it just seems stronger when you travel farther north. Or maybe after drinking 5 sample cups of syrup, your tongue is too thick to tell the difference. Regardless, maple syrup tastes delicious. Almost as delicious as the experience of carrying the sap away from the tree myself. I’m sure it’s a chore if you do it all the time, but to me it was a treat. One more thing I can cross off my “bucket” list. (Lame pun intended.)

Does maple-sugaring appeal to you?