Though only one of these is an actual travel memoir, all three made me want to jump on a plane and experience the places mentioned. If you’re an armchair traveler, you might like these.

It wasn’t until I read Anya Von Bremzen’s memoir, Mastering the Art of Soviet Cooking, that I realized I know next to nothing about Russia. Her memoir, part history lesson, part food chronicle, part personal tale, is a combination that appealed to me on many levels. While I often got bogged down in the details of the politics going on in the Soviet Union, it was a necessary frame-of-reference for the food the author then described. I learned quite a bit having the story told in this context.

Oddly, the tales she told made me long to visit Russia and see some of this for myself, and at the same time, made me think I should never visit Russia. This, combined with the recent coverage of the winter Olympics followed by the conflict between Russia and the Ukraine, all jumbled together in the same way that the information in this book did. Bottom line, I don’t know what to think about Russia.

But I do know one thing: I want to try Russian food. It wasn’t until I read this book that I realize I’ve never had Russian food. In fact, I can’t think of any Russian restaurants anywhere either. There must be some in San Francisco, though I missed them. And while the cuisine seems very similar to Polish food (which I love), there is something distinctly Russian about the recipes and cultural staples she describes. I’ll be on the search for Russian food now. 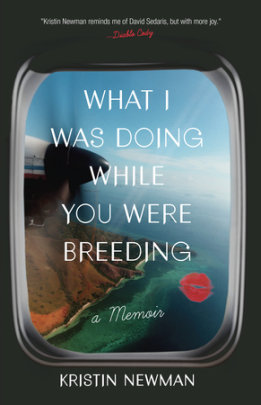 I can’t decide how I feel about this book. It was initially off-putting as author Kristin Newman immediately jumped into her sexual escapades around the globe. It reminded me of twentysomethings who think it’s cool to brag about “that time I was so wasted,” or “I was so drunk,” etc. But instead, it was Kristin boasting about all the men she slept with in various foreign countries. I don’t consider myself that prudish, but there were times when it seemed like she was trading sex for a place to stay or a ride when she needed one.

Still, her writing won me over and soon I was caught up in the adventures and locales she described. As a writer for several sitcoms, she had the time and the money to spend on periods of extended travel and her stories were entertaining and funny. It was easy to see how she made a living entertaining people with humor.

Then I’d teeter back to not liking her. Maybe it was jealousy in part because I’m more aligned with the “people who were breeding” in my twenties and early thirties while she was globe-trekking. (Is it my imagination or is her book title purposely offensive?) I can admit that a part of me wishes I’d been as wild, carefree and uninhibited as she was. Then I remember who I am, and that I’m not an extrovert who gloms onto strangers and takes them up on their offers to fly halfway around the world to stay at their place. That’s just not me.

But I loved the adventures and the travel descriptions. So I teetered back to liking the book again. It kept me reading and made me drool with envy. Unfortunately, Kristin’s sexual romps were distracting in what was otherwise a great travel memoir.

Fantastic book by the author of Eat, Pray, Love. I liked that book, but liked this even better.  I listened to this on audiobook read by the author.  It was part personal story, part sociology verging on textbook as the author explored different meanings, thoughts and customs on marriage.

Not surprisingly, the parts that appealed to me most were her travel stories. She described trying to interview women in a Mong village on their thoughts about their marriages. It was a foreign concept to them and showed us more about that part of the world than any travelogue I’ve read.  She also described her weekend trip to Cambodia, which was so powerful that it made me think I can never go there. I don’t think I have the heart for it after listening to her tale. Her descriptions were incredible.

There were other parts of the book, too, about the history of marriage that made me curious to learn more. Especially the history of Christian marriages. Totally different than what I’d always presumed.

Gilbert’s nonstop adamance about  not wanting to get married started to get on my nerves. It started to seem whiny and childish. But maybe that’s because I’ve never felt so perversely against marriage. I realize, also, that she was making a strong case for her book. Still, I started to get irritated and the book ended on a down-note for me because of it. If only she’d described another trip. That would have been a high note for me.

All three of these books made me long to pack my suitcase and set off to an exotic locale. Luckily, I have lots of travel coming up.

Do you have any books to recommend? Books that make you want to jump on a plane and fly?

20 responses to “Books That Made Me Wanna Fly”