As a child growing up in the 70’s, I heard vague rumblings about “those Commie bastards.” I think most of them came from Archie Bunker on All in the Family, but it was a backdrop of the times whether my family talked politics or not. I can’t say I ever knew what any of it meant, or why we were enemies. We just were.

So I was very curious to explore a little bit about communism while visiting the Czech Republic. I was invited to participate in Prague Special Tours’ Communism & Nuclear Bunker Tour. It seemed like my big chance to understand what all the fuss had been about. 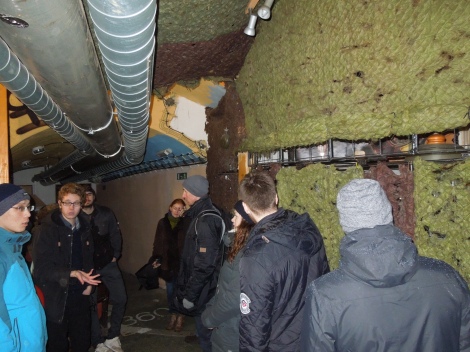 Going down into the bunker

First, we got a walking tour and explanation of the history of communism in Czechoslovakia, and I have to say, it was enlightening. I highly recommend others take this tour to ground themselves in the history of this beautiful city before they set out to see all the sights.

Statue of a hanging man that can be viewed from the Communist headquarters. The man is supposed to represent Sigmund Freud.

Our tour guide, Jacob, melded a fabulous blend of information, facts, personal stories, and humor. I quickly realized that I was correct — I knew next to nothing about the rise of communism in Czechoslovakia in 1948.

As Jacob talked, I could imagine it through my own American frame of reference as a child. The Red Army and the ‘Commies’ seemed like such a distant and yet ever-present threat in the 1970’s, not to mention the 50’s and 60’s. It was interesting to be on the other side of things in Prague and get glimpses of how anti-American they were at the time.

And yet — as Jacob explained it, it made sense that Czechoslovakia would choose this path. It seemed to work for them. In fact, it worked so well without turmoil that the Red Army stepped in again in 1968 and decided that the Czechs were doing it wrong. Owning business and opening borders just wasn’t the Communist way, so the Red Army set them back a few decades and “normalized” them again. Suddenly, their style of life reverted back to the way it was in 1948, which was more more restrictive than they’d become accustomed to being.

I won’t go into many details. You really need to hear it for yourself as you stand on the streets of Prague where so many monumental events took place. Like Jan Palach’s self-immolation in 1968 in Wenceslas Square. As it happened, I was here on January 19th which is the anniversary of the day this young man set himself on fire publicly. There is a monument honoring him on the Square and people brought flowers and lit candles to remember him. 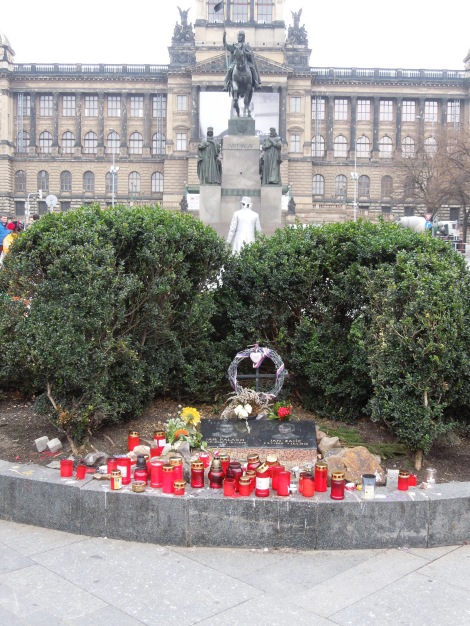 Jacob also took us to the small monument that memorializes the Velvet Revolution, so named because there was no bloodshed when communism was overthrown in 1989 shortly after the Berlin Wall came down. 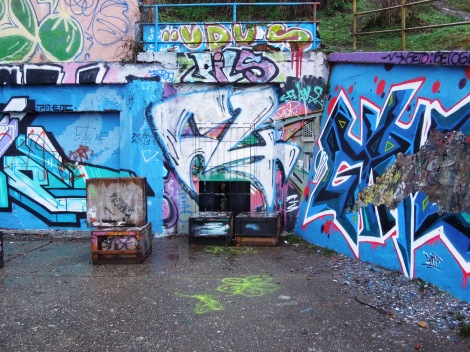 After we toured spots in the city, we took a tram and stood before a wall covered with street art. This was the entrance to a nuclear bunker meant for 2500 people, guarding against attack with a heavy lead door.

We walked down a few flights of stairs into a bunker that would have never really protected people from a nuclear attack. We entered the narrow museum displays where Jacob gave us an overview of the propaganda of the time. Most of it was absurd: like the idea that placing your baby in this makeshift box and pumping air in every 3 minutes would keep your baby safe and alive, or that in the event of a nuclear attack, it was advised to get under a desk or table and cover your head. (Same thing American children were taught, too.)

It was a fascinating glimpse into history and then we had the chance to don Czech military jackets and hats and pose for pictures with hand grenades and rifles if we wanted to. Of course I wanted to. (You’re coming to learn that I’m a master of ridiculous posing.)

Goofy pictures aside, this tour was the prefect blend of fact and fun, personal experience and propaganda, oppresion  and revolution. I felt like I had a better understanding of communism and it’s place in Czech history and then its ultimate demise as the world moved forward. Stepping inside a nuclear bunker was something I never thought I’d have the chance to do and I was fascinated by the stories Jacob shared. It was a uniquely Czech experience and one I highly recommend.

Is communism a side of Prague you’d like to explore?