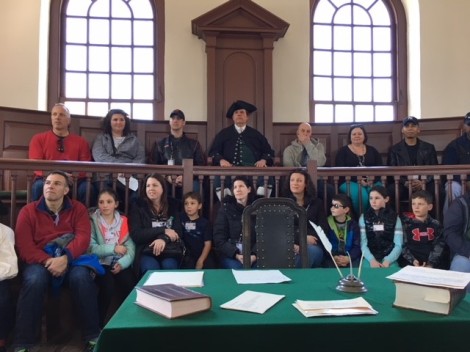 Attending a mock trial at the Virginia Courthouse in Colonial Williamsburg was enlightening. We entered the small chamber and the bailiff asked for volunteers. Some were chosen to be Councilmen. Another was the plaintiff. One was the defendant. And the rest were bystanders. The case they presented was inconsequential. What interested me more was learning where many of our legal terms came from.

The Councilmen, who were the wealthy land owners in the town, the Sheriff, and the Judge, were the only people allowed past the gated area of the courtroom. In that regard, they were the only people allowed “past the bar.” Now, of course, we’ve changed that to the legal terminology of “pass the bar” for anyone who is to enter the legal profession. But in the 18th century, this wasn’t necessary. The men deciding the case volunteered to do so as was expected of the prominent citizens of the area.

The defendant, as well as the plaintiff, then “stood trial.” Literally. They stood in front of the “bar” as their cases were tried. People who wanted to watch were also standing there. They were the “bystanders.”

I found all this fascinating. But never more so than during the evening performance of “Cry Witch” that we attended. 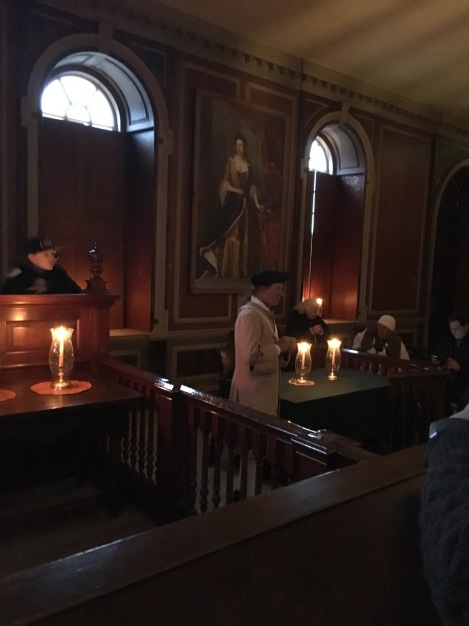 Shhhh! We weren’t supposed to take pictures, but I couldn’t resist just one before the trial started.

“Cry Witch” was a re-enactment of a true case from the 18th century. A woman, Grace Sherwood, was accused by her neighbors of being a witch. Because we arrived outside early to get a good seat, we were invited to take part as Councilmen for the case. (Woo hoo!! Always arrive early!)

Grace stood trial before us. The bailiff swore her in and we listened to the accusations against her:

Was this enough to find her guilty of witchcraft? I certainly hoped not. It’s ridiculous to think about in this day and age. But therein lay the crux of the matter. We couldn’t think about the evidence in terms of this day & age; we needed to put ourselves in the mindset of the times and what the evidence presented to us meant.

The Lead Council asked if there were any other tests that Grace might undergo to disprove that she was a witch? Yes. There was one: it was commonly believed that a woman possessed by witchcraft could not recite the Lord’s Prayer. So Grace was asked to do so.

She began, loud and strong, her words accurate. But then, she started to sway and fainted before the crowd of bystanders. We all gasped. This seemed the most damning piece of evidence of all.

The Council was asked to vote. One by one, the Lead Council asked our verdict. It circled to me.

I was reluctant to say so. I hated to find her guilty of being a witch based on marks on her body, dancing in a field, another woman’s miscarriage, and Grace’s inability to recite the Lord’s Prayer moments before. But I had to. It was 1706 in that courtroom and the evidence was stacked against her.

The bailiff came forward and lead the shackled Grace away.

The Capitol building, where justice was served.

The actors stayed in place after Grace left and shared a little more about the real case of Grace Sherwood. Sadly, we don’t know the actual outcome. The court records were lost in a fire, but someone was able to search public records and found the date of her death. She lived into her 80’s, whether because of witchcraft or good genes, we’ll never know.

What evidence would you find compelling in a witchcraft case?